Grandpa, Is That You? 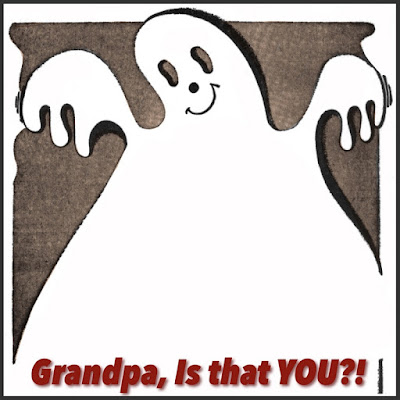 Here’s the problem with too many killer diseases, too many people getting killed all at once. It’s sort of the opposite of killing, like too many people being born at the same time or taken. We remember hearing about the Baby Boom, of course. It wasn't that long ago but it’s receding more and more into the vastness of the distant past. You get enough people doing humpa-humpa without protection and next thing you know there’s another million people going “Here I am, deal with it.” Then one by one dropping off.

I don’t think, on average, that more and more people being born is a huge problem. It might be a bigger problem if there were all born the same day. Say there was a big conspiracy of a million couples to plan and plot to have their babies all born on the same day -- December 25 -- just to put a famous birthday out there. With enough math skills and maybe some computer help, you could figure out precisely the best day for their common conception. It’d take someone smarter than me, and of course that pool is minuscule.

OK, let's assume that’s all accomplished and a million would-be mothers are taking care of themselves, not lifting more than 500 pounds at any one time, etc., eating right, getting all the nutrition they could, bulking up in the various ways, the right foods, the fetus waxing stronger and stronger, taking up his or her given room and encroaching even further to be ready-teddy out the chute when the time’s right. The hospitals are at their wit’s end, complete facilities tearing their hair out, doctors calling in sick but then compelled by an act of government, all hands on deck, whether right or left handed. Going by your personal preference.

The hospital parking lots are full to overflowing. There’s doctor’s cars illegally parked through the neighborhood, which is often a big problem at the hospital metroplexes we have today. But given the nature of the crisis, and an edict put out by the president, affirming the governor’s consternation, the illegality of parking for any length of time on these side streets is negated, sidetracked, overturned, and maybe just simply ignored for the sake of those precious ones, the baby boom to end all baby booms, millions of little crying mouths, families overrun with new responsibilities, and while not given to putting their hands out, are embarrassed by their lack of planning and receiving stipends.

I like it. I always like it when we’re working together, with decent ends in sight, the common good, mutuality and goals. What’s that have to do with Grandpa’s ghost? Just as it’s hard to keep track of millions of souls -- computers would help -- so it’d be tough keeping track of the millions of people who’ve died, were they to start reappearing. It’s a tenuous thing, identifying those you haven’t seen for 40-50 years once they’re passed on. I worry about it a little, What if Grandpa or even Grandma showed up in my bedroom. I’d have to wonder, Is it really you?
Posted by dbkundalini at 6:00 AM