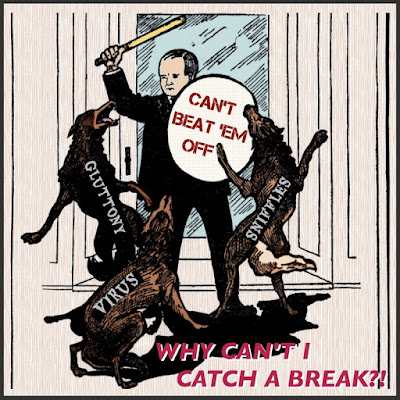 It’s never part of my self-image to think of myself as a born loser. But what a month! The virus came in like a roaring lion and went out a defeated foe, and it really wasn’t that hard. Our political leaders led the way from victory to victory. They had what we haven’t seen in a while, good old fashioned selflessness, taking no account of themselves or future, but acted with just selfless giving, single-minded direction toward the common good. It’s been a blessing to behold, such a spirit radiating out from those at the top and continuing as an inspiration for everyone, from the cabinet, our representatives, all the way down to the lonely bum on 8th street. (I should take him a tract and convert him.)

I have to say, though, I'm busting with a great pride I feel for everyone -- what a country! What a world! -- but I do feel a little shame, a lot of shame and even existential revulsion that there was a time I was in a constant stir, a panic.There were times when I had my doubts, and not just split seconds of it. I was in constant mortification and desperation, oozing sweat, gallons of sweat. “What’s going to become of me? Am I lost? Is this my last hurrah? Will I die early in the month, only to have my rotted carcass blocking the door when the undertaker comes? They’ll have to push through, moving my body slowly toward the wall, blood and other bodily liquids making a mess of the living room and further shrinking the low property value the place already has. People will pass by crossing themselves, 'That’s where they found that bloated guy.'"

I should say in my defense, I am a lonely old man, single, all by myself with my fears. My imagination always gets the worst of me, and my paranoia is so crazy, running rampant to the point that with the slightest noise at the door I know I’m done for. But being old should be a reminder to me that, “What am I living for?” Am I living just to live another terrible day? No, that can't be right! Instead it's to be bold, to have the kind of mindset that I can do it, whatever it is. If others can live, breathe and prosper, why not me?

Just let me rank the enemies I’ve faced all month -- and thank God the virus is gone after today and I can get back to normal. The enemies included the sniffles. Right away when there was a toilet paper shortage at the beginning I convinced myself -- my paranoia -- that I was sure to get a runny nose. And just like clockwork, there it was. The sniffles were so bad, the sniffle molecules multiplied faster than usual, making it a torrent. I was trying to conserve toilet paper so I was using my sleeve, which tainted things even worse. I had to dig into my stash of toilet paper and took out just three or four squares. But those were quickly overwhelmed. Not being able to staunch my tears, I was completely overcome. Excuse me for saying this -- I’m usually a holy person -- but “Gosh darn them sniffles!”

Then there was gluttony, the deep seated feeling in me that I should eat more than my fill. We couldn’t get toilet paper, but that didn’t mean I didn’t have plenty of food. Canned goods, which never goes bad, except maybe after a hundred years. Every time I had the slightest pain, even my typical sore knees, I thought the remedy was another can. So I ate my fill. And with the eating only felt greater hunger, meaning I was up to my neck in empty cans. At night, after all the viral ghouls of the Big City passed by, I threw the bags of cans in the road.

Then last I faced the greatest enemy of all, the Virus itself. I made the mistake of not taking the discarded cans farther from home. Meaning the ghouls became three times as bad, craving the off scouring and even putting 2 and 2 together that the cans came from my house, so they were banging on the windows. Virus to the left, also to the right, and trying to pry into the basement and on the roof. I could do nothing but shout, “Virus! Virus!” The universal cry of taint drove them on to the next house.

In short, it was a terrible month.
Posted by dbkundalini at 6:00 AM