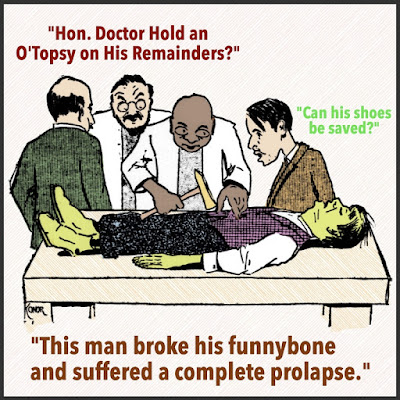 Looking back over my life -- the whole range of experiences, everything from baptism to premarital fooling around -- I’ve lived a good life. I suppose if I were to come down with something, say the Virus, I’d be completely bummed out and given to thinking about my life even more, the good, bad, and worse. Including this blog. I suppose the Smithsonian would want it. But my main focus has to be on not getting sick.

And, yes, I am very sympathetic to everyone who suffers, whether it's all the various infections, viruses, congenital diseases, etc., itself a huge range of things, everything from dog breath to Italian breath to game toe, really the sky’s the limit, something falling from the sky and killing a guy in a freak accident. It might be a plane, it might be the engine falling off a wing, a tire, a bird sucked in the turbines and shot out the back. It falls and wraps itself around your neck and you choke to death. For me that’d be terrible for my family, since we used to go out hunting for birds (pheasants, and partridges at Christmas), and what kind of karma would that be with a bird falling out of the sky and killing me?

They’d likely do an o'topsy on the situation, which they always do when it’s critical to know the cause of death. If you’re an old guy at a nursing home and die quietly in your sleep at the age of 192, naturally they forego the o'topsy, or if they do one there’s no charge, usually a newbie doing his first o'topsy as part of the practical training at o'topsy school. The way I understand it, though, and my understandings of things tend to be accurate, they keep it lighthearted so no one gets sick. “If you need to turn away,” the old doctor says to the young, “don’t be embarrassed. And remember, that plastic bag dispenser on the side of the bed isn’t just for looks.”

By the time you’re in o'topsy training, of course, you’ve mastered all the preliminary courses, passing with at least a 70% score. Everything from draining to manicures. Again, if you’re old, 192 or up, you won't need an o'topsy, so there’s some benefits to living to a ripe old age. It is obviously a benefit lost on the patient, but it’s of real comfort to the family that their loved one’s passing was without controversy.

You may recall that I mentioned in the past some of the tours I’ve taken, and one of them actually was to a school for morticians. I wasn’t queasy, nothing to that degree, and made it fine. It was for a class. It was interesting, but more interesting for the creepy/funny reactions of the others in the class. There was one guy who was so eager to see it and get the full scoop on everything they did. They took us to a closet, maybe bigger than a closet but not much, where a body was kept, and that guy was so excited about seeing a dead guy that it amused the whole class!
Posted by dbkundalini at 6:00 AM