My "Old Broken Down Jalopy" Comparisons 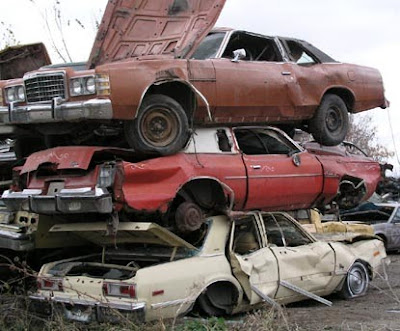 There's something about wasting away that gets to me. Like leaves -- such a big problem in the fall but once they're gone, they're wasting away in a pile somewhere else. I went to the recycling place and saw the heaps of smoldering leaves. They're down there about to erupt into flames if they don't keep turning them.

I'm going to compare it all to an old broken down jalopy.

I was talking with a guy who's been watching "The $25,000 Pyramid" on the Game Show Network. Not current shows, but shows from 1985. Their top prize in the last couple days was "A Brand New 1985 Chevy Chevette!" Which has to be a broken down, smashed together, chunk of metal somewhere by now. In fact it was probably compressed into a cube and turned into a couple newer cars since. Or it's rusting in a junkyard, watched over by a junkyard dog and even he knows it's not worth guarding.

Definitely an old broken down jalopy!

Everything's getting old, everything's falling apart. It's the way of all flesh. It's atrophy, entropy, or something like that. Like my dog. She's still spry, but dog years are brutal. They've got a week everyday! And seven years every year! Pretty soon she'll be an old broken down jalopy of a dog.

The cats are getting that way. But the biggest cat seems to have recovered quite a bit in the last year and a half. Back then I was helping him get on things because he couldn't do it. Now he's getting back on stuff, stuff I don't want him to get on, like the kitchen counter. So now I have to hide the potato chips in the cupboard. But both cats will be 15 this summer sometime. Meaning they're both virtually old broken down jalopies of cats.

And take Grandma. She's in bed about all the time. I might have to move her to the manor -- I don't know. Ever since the Republicans terminated Medicare, the bills have really gone up. I love her to death (please pardon the expression), but let's face it, she's an old broken down jalopy of a Grandma. 104 is very old. Fortunately she's not a dog, in which case she'd be 700 and something. And definitely an old broken down jalopy of a dog.

And finally, the last one standing is me ... and will be me. The other day I was looking at the scrapbook my Mom made of the cards people sent when I was born. She wrote in there how much I weighed, how long I was, the time of birth, and how "sweet" I was. The scrapbook is in fairly good shape, but it's almost 60 years old, and if I don't take good care of it, it'll soon be an old broken down jalopy of a scrapbook.

And what about the guy it describes? Bad teeth, losing my hair, my looks are more ruggedly mature than what my baby pictures showed. I'm a mess. I am well on my way, it would seem, to being an old broken down jalopy of a man.

But my doctor says I'm still in pretty good shape. So that's a great comfort.
Posted by dbkundalini at 9:52 AM