After The Industrial Apocalypse, Welcome Home 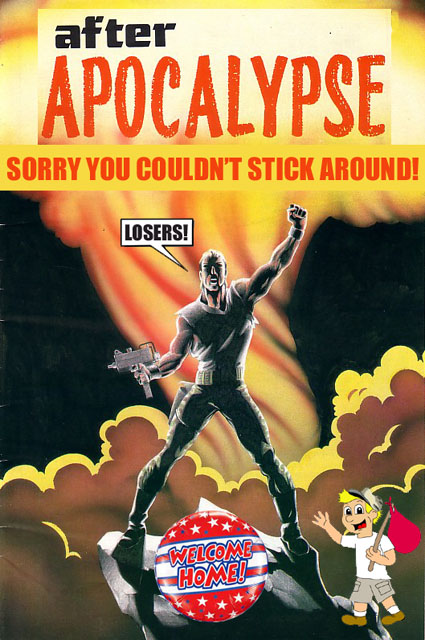 Welcome home to all the former residential industrialists who ran for the hills! We're happy to report that most of your homes are left standing, thanks to those who were brave enough to stay behind and defend them.

It's been a tough few days, days of very bad news, with a lot of fear. Many of our number -- it's sad to say -- decided to save their own precious skin, with no regard for anyone else, such as the community they left behind. A few of us, the strong and the brave, the loyal and true, were right here at home, pitching in any way we could to defend our property, our families, and our way of life ... and theirs.

Could we have used everyone else's help? Yes, it would've come in very handy! But, you know, different people have different priorities. Different ones face adversity in different ways. Many folks, unfortunately, are nothing but cowards. I'm just thankful that a few of us were brave enough to make up for them. And, really, who knows? With that kind of wilting character, it may have been true they would've only gotten in the way anyway. They'd always need someone to hold their trembling little hands, lest they got the vapors and wilted away to nothing.

But ... let's let bygones be bygones ... they're on their way home now, now that the danger has passed, so let's open our arms and say, "Welcome home!" If we can physically say the words. We can only hope there's no crisis on the road back, because we know how averse they are to every minor difficulty. It might be too much for them if there's not a helicopter tossing out bottles of water. Or air conditioned tents for their little tent cities up in the hills.

In a terrible crisis, of course what you want to have is All hands on deck! Everyone up and at 'em! Everyone alert to the needs of the moment! No one shirking, no one shrinking away, no one turning tail to run. It's shameful, really, what happened. The Major Industrial Powers -- they had some bravery. They came in with their forces, the military, the militias, the process servers, and all the rest. They weren't shirking. If you would've told me that would've happened, I wouldn't've believed you. I would've thought the Residential Industrialists, if anyone, would've rallied to the cause -- and a few did, but the overwhelming majority simply threw up their hands and ran.

We see it all the time when there's trouble. People are afraid of the big bad hurricane. So they get in their cars and clog up the highway, running for high ground. Or they're afraid of a tornado, hiding out in the basement. Or tsunamis, wearing a raincoat. The list is endless. We teach fear. That's the problem. In school, they teach fear. We all remember the fire drills we had. There's a fire, the first thing you do is abandon the building. Instead of everyone grabbing a glass of water and putting it out! God forbid we save the school! Then people carry over those lessons of running to the point that nothing's worth defending. No matter what it is, Get out of my way! I'm running!

But then, like clockwork, now that the trouble's in the past, the shrinking violets are coming home. So, let me be the first to welcome you back. We hope that somehow, someway, some day, you'll be able to live with yourself, knowing what the rest of us are thinking, that you're nothing but a bunch of slackers. Fair weather friends. In so many ways, a waste of space.
Posted by dbkundalini at 4:34 AM