If This Couch Could Talk 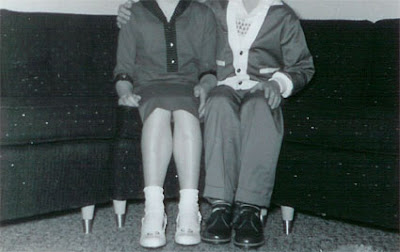 If this old couch could talk, I wonder what all it'd say. I'm sure there'd be lots on its mind, if somehow we could evince its presently mute testimony.

It's been setting there for quite a while, decades. That much we know for sure. The various parts that make it up, the legs, the arm rests, the cushions, the back, haven't forgotten what they're for. They're still in place, cohering together despite the passing of so much time.

That old couch has had a lot of people sitting on, a lot of people ... The years have been kind to it, as one after the other has plopped down on it and taken a load off. Of course I've sat there many times, maybe more time than anyone! I pretty much take it for granted, except on a day like this when I'm feeling overly sentimental.

How often do we go by a chair, a bed, or a couch without giving thought to its burdens? I know I'm not one all that faithful to express my thanks for a job well done, at least to inanimate objects. But then, you know, the years do pass by, and you look down and see it still setting there, and you suddenly realize, Good God, haven't we been through a lot together?

Perhaps I'll never know what the couch actually would say if it could talk. But I can give voice, at least in my own mind, to the speechless. I truly believe that's a worthwhile exercise.

If the couch could talk, I'm sure it'd remember well the day Grandma and Grandpa brought it home from the couch store. I wasn't there, but I'm sure Grandpa probably sat on several difference couches before he settled on this one. And maybe Grandma razzed him a bit for being indecisive, but, hey, if you're going to be sitting on a couch for years at a time, it pays to scrutinize your options. As it turned out, the couch outlived Grandpa, even though it's not technically alive and he was.

I know for a fact, if the couch could talk, it'd say something about us kids. We'd be up on it tussling, smacking each other. Or we'd be in the other room tussling and smacking each other, and they'd put us on the couch for punishment. And they'd have us lined up on it for pictures. I was looking through the family albums and that's what I found. Never a picture of just the couch by itself, but always with someone sitting on it.

A big moment for the couch, and a good memory if it could talk, was always Christmas. We were lined up on it again, but this time with all the joy of anticipation, practically peeing our pants with joy that Santa brought us a little sack of candy. I remember getting my candy cane and that was a big deal. I could take five or six licks a day and make it last till May.

And I know the couch would have a few memories of sick kids, home from school, sleeping on it, or tossing and turning on it, or just laying there watching TV from it. Somebody would get sick all over it once in a while, and Grandma would have to come and lovingly wash it clean again. There's been a lot of spots on the couch over the years. And maybe, just say you could slice it in pieces, you might still find evidence subcutaneously of those spots. But from the surface, with so much cleaning and so many other activities taking place on it, you don't see anything. It's self-cleaning.

I know something the couch would probably say, Hey, give me back that quarter, from all the times I've reached my hand down it looking for change. I've also found pens, dirty pills, receipts, little toys, and all manner of whatnot in its cushions. You never know what it's going to yield next.

Then there have been all those times of passing. And we've had loved ones over, sitting on the couch, sad as they could be that someone beloved in the family had died. That's the way it was for Grandpa. His place on the couch was suddenly empty, and the cushion in that section got quite a break, until someone else finally decided it was OK to sit there.

There's a lot of memories in that old couch. And somehow, if it were possible, I'd love to talk over old times with it. Maybe it heard some gossip I missed out on, including, who knows, something about me.

EVOCATIVE UPDATE -- The more I think of it, the more there is to say. What of the babies being changed? Or the toddlers who sat here when bad, the bigger kids rasslin' around, a few who lay there and kicked the arms (attached well enough to endure it.) Then there was Grandpa rocking back and forth when laughing. And all those times he'd dose off for a catnap. Or Grandma sewing a doily ... sitting right there. And all the boys and the girls they brought home. And the girls and the boys they brought home. Surely someone did some hanky panky on this old couch, and if the couch could talk, we'd find out about it!
Posted by dbkundalini at 1:41 PM