Rumblings Of Troubles For Industrialists 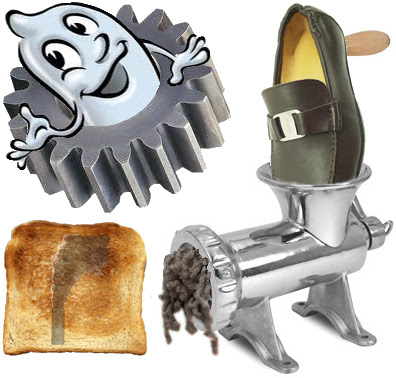 I really don't know what else to do. I've got a bunker mentality right now. We're in a holding pattern, waiting to see how bad it's going to be.

The prophecies of Jor-el (also known as Garrett Al and Geritol) induced fear in me and in every member of the Residential Industrial Movement (RIM) still in his right mind. Surely no incidence of gargling has struck terror in so many breasts at any other time in recorded history. So why'd it have to happen this time?

Everything was going so great for the RIM. We never thought it'd come to this, with prophecies of armies and various privations unfortunately in the offing. I always thought the Four Horsemen were meant as a more generalized horror of judgment; I didn't know it'd manifest itself with pinpoint accuracy against one little substratum of industry. But then the Major Industrial Powers (MIP) probably have a legitimate beef, at least from their point of view, since they've had the industrial field since the Industrial Revolution. We should've guessed they wouldn't take kindly to competition.

My biggest regret is not that we gave it a try with the RIM, but that we didn't manufacture tanks, guns, and napalm, instead of tires, vats, and wheels for hospital beds. At least we could've made a few catapults! But now it's come to this. The rumblings of troubles are so dire that there's no mistaking our fate. Geritol wasn't gargling a half hour for his health!

And speaking of Garrett Al, he came by my place yesterday after church. For a while, it was just him and me. So I figured he might drop the prophetic mien, but I guess it wasn't mien't to be. He stayed completely in character, leading me to conclude that Pastor Wadd's sermon must have really done damage to the normal male libido. (Pastor Wadd's specialty is fighting sexual addiction, and Geritol figures prominently in my personal biography as a man arrested for trying to sexually assault me. Even yesterday, Jor-el was soon to boil over, which I'll get to...)

Anyway, we were out in the plant, and I asked Garrett Al if he was sure -- 100% positive, beyond any shadow of a doubt, rock solid, no hold's barred -- that our troubles were real. He looked at me, an all-seeing man in a fading orange robe and hood, and the serious look on his face left little room for optimism. I asked him one question: "How bad is it?" He spoke not a word, just like on "The Red Skelton Show," but led me to my little office, the room with the small window.

There he patiently removed four slices of bread from a bag. He set them on a plate. He took two of the pieces and put them in a toaster. He dialed the toaster as high as it'd go, then depressed the lever. We waited an agonizingly long time while they "cooked." Normal toast is done in a fourth the time, making me wonder why the toaster dial even goes that high. He took the two blackened slices out. Then he put the two uncooked pieces back in the bag and closed it. The charred toast represented the RIM, and the remaining bread, of course, the MIP.

Next, we walked out of the plant and into the house. He led me into my bedroom, then to the closet. He opened the closet and took out my good pair of shoes. We went into the kitchen, where we keep the meat grinder. He proceeded to grind one of the shoes until it was a large pile of coarse leather. The other shoe, Jor-el calmly carried back to my room, and I witnessed him putting it back in the closet. The ground up shoe represented the RIM, and the other one, naturally, the MIP.

I shook my head and said, "So that's it? There's trouble afoot?" Again, Garrett Al held up a finger, as if to say, "Patience, my dear friend, and you shall see."

Finally, and this is where his wild libido made its reappearance, we went back to the plant. I shuddered a little as I saw him reach his hands inside the robe and heard the sound of unzipping. For one terrifying moment, I was right back at that night in 2009. But he gave me a signal that I had nothing to fear, thrusting his hips away from me and in the direction of the factory. Now, this is where the robe comes in very handy, because it keeps me from having to describe what happened next in blue language, which would violate one of my strictest rules.

Let me just say, there's some exposed gears on my tire retreader. And Geritol ascended until he was on top of that section. He was straddling it. Then, with his robe draped discreetly, covering everything, I saw what appeared to be his covered right arm smacking against the inside of his robe. It was so rough it looked like a bear trying to get out of a tent. His head was arched back, the look on his face the look of pure ecstasy. Finally, I heard an otherworldly growl rumbling from his throat, and a climactic moment of release appeared to have been reached, with several cosmic aftershocks. He said not a word, but climbed off the equipment, leaving behind such a mess that I'll have to file insurance. Thanks to his religion, the guy had been stoved up like a bull. He enjoyed that a little too much.

With that I had little else I could do. I bade Garrett Al a good night, and did what anyone in my position would do ... I called Pastor Wadd and reported him.
Posted by dbkundalini at 4:34 AM