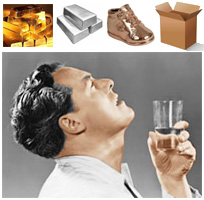 I was on the phone and in meetings with Residential Industrial Movement (RIM) entrepreneurs throughout the day yesterday. The disruption of the meeting and the supposed revelations of the prophet Jor-el concerning the future of the RIM were the talk of the town. We're desperate for clarification. Some who have unlimited minutes on their phones are even calling other counties and states for their take on the situation. Reportedly, local prophets in other places are also agitated.

As for me, I wanted to go right to the source, Garrett Al (Geritol, Jor-el) himself. That was also a priority for some of the RIM members closest to me. We wanted to give the man a chance to retract his statements if he was just pulling our leg, or if after further reflection, he had changed his mind.

He came to my tire plant. Now, my dealings with Garrett Al are such, after the sexual assault he tried on me in 2009, that a couple days ago if you'd've told me he was a prophet, I would've said that guy wouldn't know prophecy if he ate a crystal ball and crapped out fortune cookies! But that would've been before I saw him myself, his remarkable transformation into Jor-el. He was really into the character, or his new self. What caused the big difference, I was given a hint of in that he was accompanied by his pastor, a Rev. Wadd, who explained that he'd been counseling him for sexual addiction.

It took time we didn't really have to waste, sidelining us for about a half hour, but Pastor Wadd shared with us that most people are suffering from sexual addictions, as evidenced in everything from the terrible stories of sexual crimes that are in the daily news right down to ordinary married folks who choose to have children. In my opinion, the pastor seemed to have a slightly skewed sense of things -- maybe overly censorious -- looking everyone in his path up and down for what might be their hidden fetishes, hangups, and latent proclivities. But I could see how he might've easily been able to influence Garrett Al and make a productive citizen out of him once again, who before was consumed with the drives given him by nature.

Anyway, they came to my plant. Jor-el himself wasn't saying much. He was still into the theatrical atmospherics of being a prophet, the robe and everything. The whole assembly came together around some tables, with Pastor and Geritol at the head table. I said we were ready to begin. I sipped a glass of water, which appeared to prompt Garrett Al to pour his own glass of water and drink. Well, not exactly drink.

Every eye was on him, with the possible exception of Pastor Wadd, who obviously likes to scan a crowd for problems. Then Jor-el took the glass and began gargling at the table. Some of the entrepreneurs began laughing and so did I. We thought, So it was all a joke! But he continued to gargle, and after a while the laughter subsided. Then he'd swallow, pour some more water, and gargle some more. Gargling, just incessant gargling. He kept gargling, loudly too. 15, 20, 25, 30 minutes...

Without him saying it, it started to become obvious to me that his gargling was his message to us, meaning that he foresaw the rumblings of troubles coming for the residential industrialists, and that it would be non-stop and terrible to behold, without mercy. I explained this to the assembly. Pastor Wadd nodded at me, then lowered his eyes a bit. I noticed I had my hands resting on my legs and felt I should move them up on the table.

Geritol then spoke. He addressed me as Super Brain. In light of the events of the last couple days, this abashed me greatly. He said, "Super Brain probably already knows this," and then proceeded to sketch out a vision of the Four Ages of Residential Industrialism that I hadn't imagined. According to Jor-el, the phenomenon of the Four Ages for everything is real, but unfortunately for Residential Industrialism, it's very compressed. We've only been going at this since around May of this year. But he had it down, that the Golden Age was roughly that first month, then we quickly went into the Silver Age, then the Bronze Age, and since mid-September we've been in the Paper Age.

It didn't make a lot of sense to any of us, but Pastor Wadd had a theory about the same thing happening to the antediluvians, because of their leaders' lust for the better-endowed angels. I was shifting uneasily in my chair. You know how you occasionally have an itch in a very private place? And if you're in private you can scratch it? Or even if you're with folks, if they're involved in some other activity, you can quickly and with some discretion reach down and take care of it in about five seconds? This was impossible under the eagle eye of Pastor Wadd, who was looking for every sign of perversion or a double mind. Honestly, I wasn't lusting for angels! So I kept shifting uneasily, almost to the point where it looked like I was trying to communicate my own prophetic sign.

Nothing about Garrett Al's presentation gave us any confidence. He was still right on track with the message that we could expect nothing but troubles, and that the RIM's best days were behind us. The mood was hushed as the entrepreneurs filed out, leaving me and the prophet and pastor behind.

Then at the end, Pastor, Geritol, and I went outside. The day was still very sunny. There was no sign of gargling on the horizon. It seemed a perfect day to go to the bathroom and scratch, then get back to work and maybe even step up production. We stood there, though, and after a while it became uncomfortable. Pastor seemed to sense that I needed to go to the bathroom. Finally, the tension was broken when we saw a young woman walking up the road, obviously pregnant. Pastor Wadd made a little joke, "Anyone you know?" I disavowed any knowledge of the situation, which is true. But he handed me his card anyway.
Posted by dbkundalini at 4:34 AM