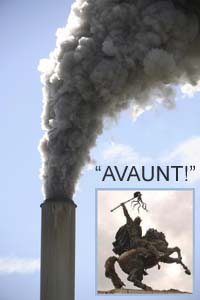 Today's post is a highly personal one, as I buck up my self-image after a day of terrible doubt. Remember yesterday, I envisioned my own passing and that of my blog, as seemed all but certain at some point in the next five billion years.

Of course it seems absurd even to me that something this piddling would set me back. But in fact it did. I think there's something about extremely large numbers, billions of years, that messes up my thinking. You know?

Our thinking -- and I think this is true of other people too -- can be spooked. Because we're so used to thinking in terms of today and tomorrow and Christmas and our next birthday. To suddenly see yourself dead, the entire world destroyed, and your blog ended is different.

So yesterday, through the day, I had a hard time putting it out of my mind, but I did my best. As much as I could, I focused on my current reputation, the boldness I live by, the success I've had, and my life's overall mojo. This became a matter of exaltation, lifting myself in self esteem. As a life coach for others, naturally the saying, "Physician, heal thyself," applies to me.

For this purpose, then, in the exaltation process, I envisioned myself in the greatest terms. I became the embodiment of the conquering industrialist, like the dreaded monarchs of old.

You also can imagine it: There's the parade of the conqueror, leading in his foreign captives, along with the beasts of the foreign countries, and their women. Picture it with me, but remember I said it was highly personal. I have to work on my own personal issues, even if some think it's tasteless to do so in public.

Here comes the conquering industrialist, conquering what exactly? The Major Industrial Powers (MIP), doing his best to take them captive. In cage number one, a big gold cage on wheels, we have MIP executives who have been captured. They're nude, displaying their very small parts, and slumped against the bars. In cage number two, a big silver cage, we have MIP officials, nude, displaying slightly larger parts, angry at the executives for advising them to cut corners, making them susceptible to Residential Industrial Movement (RIM) forces. In cage number three, a big bronze cage, we have MIP underlings, foremen and leadmen, also nude, displaying larger parts yet, angry at the officials and executives for giving them such shoddy leadership that their products turned out inferior and overpriced. And in the last cage, the fourth, a big corrugated cardboard (paper) cage, we have MIP peons, workers, truck drivers, and lunch ladies, all nude, displaying the largest parts, except for the lunch ladies, angry at the underlings, foremen and leadmen, and the officials and executives for implicating them in this massive fraud called the MIP.

In this scenario, I am the conquering industrialist, along with other RIM leaders, distributing whips and cattle prods with which to threaten the MIP captives. But at the last second, in my mercy, I command them to set their weapons down, and release the MIP failures, who take multiple paths out of town. Of course the peon class we would welcome more gladly into the RIM ranks; that goes without saying. And up the line it would go like that, with the MIP executives receiving the most scorn, being passed over for any pencil pushing jobs there might've been. As said, they take various paths out of town.

OK, now put this industrial parade out of your mind. And picture me, consolidating in my own person everything, the best the RIM has to offer. I become larger than life, a colossus, striding over the world, going from victory to victory. I take my place, the red giant sun behind me, even it being dimmed in the effulgence of my glory. I occupy such a position of prominence and pride, like the biblical Herod who became filled with worms and died, the people can't even look upon me for the brightness. "This is not a man," they shout, "but a god." I advise my tribunes, much shorter than I, to plead with the people, that such a conquering industrialist considers the word "god" beneath him. They must do better!

Three graybeards step forward, who have studied theology and depth psychology, and they go into a big clawing death match, scratching and biting. One graybeard falls. The other two bring out cudgels, mallets, and spears, and fight. The larger man has the smaller man down. But the smaller man thrusts a scimitar into the larger man's gut, all quite a surprise to him, I must say. The winner's graybeard red with the others' blood, he proclaims me the master of life itself, knowing how many factories depend on my beneficence.

As to the conquered women I mentioned, they minister to me in private.

Right here, after their ministering, I become fully aware of the phenomenon of 'The Psychic Price,' and I become so small the people can't see me. The women don't know what happened to me. I am suddenly dressed in rags and, unlike Herod, am able even to elude the much larger worms that are on the way to consume me. Notice how great I am! Because this is the stumbling block that gets everyone else! But I am a very small man, dressed in rags, little more than a worm myself!

I pick up a used toothpick, its size in relation to me the size of a huge sword. This now is the conquering industrialist's sacred sword. I turn a corner, unseen by anyone, and run right into a dust bunny. I use the sword, this toothpick, to cut my way through the dust bunny thicket. I'm becoming smaller all the time. I'm so humbled. I'm being blown about in the wind and happen to land on top of a fleeing beggar's sandal. He's running because the whole crowd is running, not knowing what happened to the colossus who had been before them. Even the women wish I'd come back.

But the beggar is looking out for number one. He runs to a place beneath a bridge, where he stays. I'm there, now hiding behind a grain of sand. I hear him thanking his lucky stars that he wasn't trampled. He falls asleep, and I hear him blubbering in his sleep, that God should bless their mighty victor, meaning me. "Keep him safe, snuffle, snore," he says. "Bring him prosperity, snuffle, snore," the beggar prays.

As I hear him pray, I'm increasing in size. Finally, I'm normal sized. And because I have powers, I start a campfire and make the man a decent meal of two eggs, four pieces of bacon, hashbrowns, and pancakes with strawberries, sauce, and whipped cream, which you might recognize as IHOP's current special, the Rooty Tooty Fresh and Fruity, Bacon and Eggs Combo, embarrassing to say but delicious to eat. (I don't actually say it. I just get the waitresses' attention, point at the menu and grunt.)

After a while, the beggar sniffs the air like a horny camel, being very much like a thankful Ali Baba at this point, knowing Allah has sent him the food of the gods, something apparently from IHOP. He looks over and sees me keeping the eggs warm in the fire. I have on a very coarse fiber sack dress, or maybe I should call it a prophet's robe. And a hood. My head is pulled in so he can't see my face. The hood's hole keeps everything very dark within. But when I turn my gaze on him, he's able to see two gleaming lights, my eyes.

I suddenly remember he saved me, turn off my eyes and the darkness within, revealing myself very much a normal man, a humble man. He sputters, "You, you, are you?--" "Yes," I smile, a smile playing across my lips, "I am me. Good to know you, kind beggar."

(Let this be a lesson to you. Sometime in the future you too might see me. Oftentimes, I'm right out in public. But I will be that anonymous person you may not recognize. I could be in the next booth from you in a restaurant. I might be that guy in the library earnestly scanning every magazine they have. When you look over, maybe I'll have my eyes turned on, or maybe they'll be turned off. You never know. In fact, I've done many things in life quite anonymously. The other day I put money in a parking meter; no one around appeared to recognize me; I did it like any other person. But maybe you'll be one of the first, after this beggar, of course, to know it's me. Wouldn't it be great for you to recognize me?)

I tell the beggar to come to my factory. I give him a whitewall tire for his trouble. I take off the prophet's robe and put on my normal clothes. People come by to see me, telling me of incredible dreams they've been having about me and the end of the world. I soothe their frazzled nerves, telling them, "No, as long as I'm in the world, the Earth will be spared."