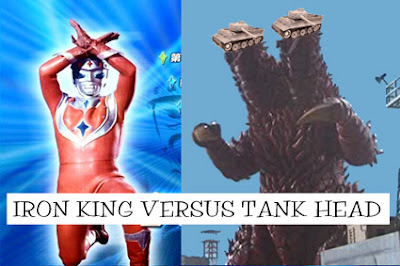 The bad news is this: The Major Industrial Powers (MIP) have prevailed over the Residential Industrial Movement (RIM). But damage and civilian casualties have been greatly limited, thanks to the frantic evacuations of RIM families, our benevolent willingness to compromise, and to the intervention of both a super hero and forces out of Heaven.

The MIP was brazen enough to call in thousands of militia in addition to the official military. They bought off tens of thousands of federal, state, county, and local officials. That shows what they're made of, pure scum. The deck was stacked in their favor. In addition to the physical threat, they had tons of official paperwork in place, being delivered to thousands of RIM facilities across the country by census workers, otherwise out of work but pressed into last minute duty on this matter.

Factories have been shuttered, chained, and in some cases destroyed. RIM officials, those who hadn't fled for the hills, including myself, were presented with the alternatives, mostly involving continued legal scrutiny vs. the possibility of immunity if we were to give up industrialism. Looking at the mounds of paperwork, much of it literally over my head, we decided it was hopeless. On patent violations alone, there was over a million lawsuits threatened. I myself, as a tire manufacturer, was served with hundreds of patent summonses, everything from copyrighted tread patterns to the shape of the wheel itself. It turns out that one big company has a patent on the wheel's circular shape and licenses it out to other manufacturers.

But like I said, we had some great assistance in a battle that, alas, was never really allowed to rage.

The forces were assembled in the field north of my property, with thousands of tanks, infantry, missile launchers, and so forth. Those were the MIP forces standing against us. The RIM contingent stood at the east fence, with sticks, homemade knives, and a few muskets some of the older guys kept above their fireplace. (We were really down in numbers because of all who fled.)

At this point, the MIP was looking to make an example of someone. Of course, the militias with the official military were itching for a fight. Even they had their own tanks. I wasn't really looking to die. So I had an idea. As you know from yesterday, I was spiritually ready, plus I have a couple friends in Japan who know something about fighting. Of course I'm talking about Gentaro and Goro, the stars of "Iron King."

I contacted Gentaro yesterday and told him of the situation. He knows I'm a big fan of their '70s Japanese sci fi action series, having the entire thing on DVD. So together with Goro, who transforms himself into the giant cyborg action fighter, Iron King, they made their way to my home as fast as possible.

So there we were, the RIM, with our sticks and homemade knives. The militias came running toward the middle of the field. Goro ran behind a big bale of hay, crossed himself and shouted "Iron Shock!" That's what he does. Instantly, he was transformed into a cyborg about 100 feet tall. He went out to the middle of the field. One of the militia men, in charge of their own giant, seeing Iron King, radioed to the hills, and out came Tank Head.

They fought and struggled there in the middle of the field. First Iron King seemed to prevail, then Tank Head came back. It went back and forth like that for a while, until I saw Iron King's water meter start to blink, meaning he was dangerously low on H2O, which he needs for his strength. It's a very annoying problem. But it gives Gentaro a chance to fight.

So, Gentaro, looking every bit a normal human being, and he is, ran into the fray. He has a whip that extends itself in a gigantic way. So he was out there whipping Tank Head. And he was about to bring him down. But it wasn't enough. I was thinking, "So much for the expensive long distance charges to Japan!" But I had another option up my sleeve. 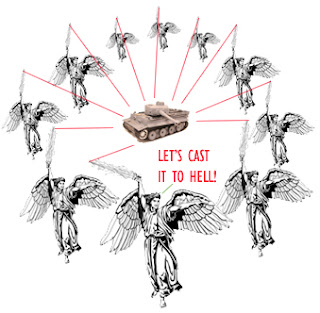 Remember my great spirituality? I'm the one man in town, and possibly the world, who can move Heaven with the snap of a finger. It comes from years of sacred sword play, manipulating Chinese gong balls, and having a smokin' hot interpretation of scripture. I have a very special pull over ... angels. Not the kind of prissy angels you hang on your Christmas tree or hand out at nursing homes as party favors. But big, burly, sacred sword-wielding, angry-looking, bad ass buggers, hedgerows of warring angels, who'd just soon annihilate you as look at you. But they like me!

I gave one of my very special prayers. The prayers I utter are not the kind that pussyfoot around, nor do I have to wait five years for an answer. I can just grunt in a holy way -- I could -- and the heavens open and the angels are there. And so it was! I was about to say, "Deus ex machina, I call for a hedgerow of warring angels." But before I could open my mouth, while the words were simply in my mind, there they were...

LOL. I had a very strange thought when I saw them. A funny thought. I was thinking about the Tony Orlando song, "Tie A Yellow Ribbon 'Round The Old Oak Tree." Remember the part where the guy wants one yellow ribbon around the tree or he'll stay on the bus? It makes me cry to hear the part where he sees a hundred yellow ribbons! But that's what he got. Do you see where this is going?

I was only asking for one hedgerow of warring angels, and, guess what: The sky was filled from the east to the west with so many hedgerows of warring angels it darkened the sky! It was an awesome sight. I haven't seen so many of one thing since the time I went to the basement of a guy I once knew and saw he had literally collected over 100,000 pennies. It was crazy! Bottles, bags, boxes ... pennies everywhere!

The tanks were midfield, heading for the RIM forces. Tank Head was leading the way. Gentaro had assisted Goro off the field and, like a dog, he was getting a lavish drink from a drainage ditch. Next thing anyone knew, the hedgerows of warring angels were electrically levitating tanks and missile launchers between them, and casting them into hell, by the hundred! It was a beautiful sight! And as far as Tank Head, they zapped him and I saw him shrink. So if anyone out there sees a mouse with two heads shaped like little toy tanks, maybe put out a trap tonight. He could bite.

With all this death and destruction, into the middle of the field came running the governor of our state along with one of the officials of the MIP. I prayed and the hedgerows went and sat on the horizon. The officials recognized certain things were true, one, that the RIM had greater help in the realm of super heroes and heavenly visitors. But they also insisted that we were violating many laws, patents, and all that. So it all came down to money!

That's when we worked out the details about immunity and all the rest. And we agreed that the RIM would be disbanded as an industrial movement in exchange for legal concessions. And so that was the end of the struggle.

The hedgerows went back to Heaven, awaiting my slightest whisper. Gentaro and Goro came over and toured my former tire factory. I gave Goro a bucket of water from Grandpa's well, which he averred would keep him well hydrated for years to come! Before they left, Gentaro played his guitar and sang a folk song, some of the lyrics being translated:

I have loved the fields of lilies, the beauty of our homeland.
And I have loved your fair eyes, my darling.
You have dressed yourself in white, like the clouds passing by.
May you keep your charm and youth always, growing old with me.

(For those who know the Iron King show, Gentaro's songs have nothing to do with the show or its theme, but, to save production money, are merely public domain folk songs, mostly with love and nature themes.)
Posted by dbkundalini at 4:34 AM