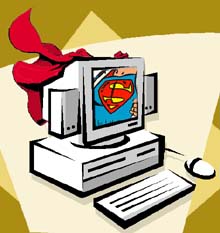 I hate always being the guy who has to toot his own horn, but think of all the money I'm saving.

In sports, you have a teammate who steps up and says, "Joe's too modest to say it himself, but I'm not -- he just played the best game of his life." Then Joe pays him off in the dressing room and everyone's happy. With the Residential Industrial Movement (RIM), there's plenty of guys who'd be willing to say it for me, but I'll spare them; they're busy, plus it's just an unnecessary expense.

So I'll just say it myself. And, really, it's not like I'm claiming for myself anything all that great. I'm just saying my brain rivals that of super computers.

After all, I think I know what super computers know, but I'm pretty sure there's not a super computer that knows what I know. Because I haven't been examined by one, it hasn't had a chance to get my mental coordinates into its system. And in certain respects, even if it did, it'd probably short out and never be the same. It'd be twitching and babbling, spitting out incoherent or obscure phrases like, "Cheese hits my tongue with a furry feel." Let's say a super computer were to say that. Guess what, I said it first, yesterday at lunch. So there's proof that my brain rivals that of super computers!

But how this came up had nothing to do with that. It came up yesterday in my post on praising the Major Industrial Powers (MIP), when I was trying to work out some of the mysteries of karma, or, as I call it, the psychic price. I've been thinking deeply about these issues, trying to unravel things that are very nebulous. You may have followed the arc of my thinking, which happened at about 400 mph, faster, they say, than a super computer. I decided against praising them, and I believe I decided right.

As I explained, tearing them down might help pay some of their psychic price, or atone for some of their karma, with their suffering. But praising them might help puff them up, making them susceptible to greater karma on down the road. But I came to the conclusion that with the MIP's vastness as an organization, the discernible difference in the psychic price owed was likely to be negligible. And, in fact, it might serve to increase our psychic price, because it'd all be a lie.

I actually have it in my genes to do so, too. I've never mentioned this on the blog, but it's an absolutely true fact: My dad, the swami, built one of the world's first personal computers. Whether you'd call it super or not, that I can't say. We kids thought it was pretty super. It had blinking lights. It was a device he called "Mr. Know-It-All," and we fed it punch cards. A question was printed on the card, and somehow "Mr. Know-It-All was able to blink the answer (A, B, C, or D) through reading the punch card.

But I believe they've come a long way since my dad's great little device. Now we can Google our answers, no longer needing cards. And a super computer is even better, because it quickly scans through every variable and possible answer, at long last settling on the correct answer after something like .000009 seconds. Very slow, because I can usually give you the answer in a snap.

But I'm not putting down super computers. They're fast because they're built for speed. And this is something interesting: A super computer only knows two things, 0 and 1. Apparently the less you know, the smarter you are! So it's cycling through those two numbers at super speed, shuffling off a few 0s, then throwing in a few 1s to make it look good. The answer comes spitting out, and if you have more 0s than 1s, that's still good. In the super computer world, a lot of 0s still adds up to something!

Whether kids are smarter than a super computer, I don't know. Kids are smarter than a lot of adults on the computer. We've all heard that. I know my teachers didn't know a thing about computers, word processing, Google, or anything. Total ignoramuses. Of course that was before any of this existed, which is something of a good excuse for them, looking back on it.

We in the Residential Industrial Movement (RIM) think highly of ourselves and our skills. This comes from the confidence we get in doing it ourselves, digging in and building factories, plants, and entire industrial complexes of our own. We've gone from regular yards to these great facilities in a matter of months. So you can see, whatever it is, if we set our minds to it, we can get it done!

Super computers can do a lot. But they haven't built one yet that can rival us ... or me.
Posted by dbkundalini at 4:34 AM