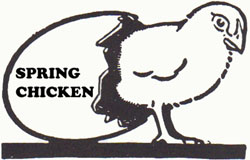 One of the first things I read today, but can't now find where it was exactly, is that men generally consider themselves old at 58 and women at 29.

I didn't really look into the reasons why that might be -- I can guess. But it's interesting just on the surface of it that 29 is half of 58. It's kind of weird in this sense, that women typically live longer than men. We're busy dropping off at 60 and they go to 105. Yet they feel old at 29?

Speaking of 105, I was telling some folks the other day about a lady I knew who was 105. She basically didn't have much to say except, "I'm 105." True story, brief but true. She lived 105 years and is immortalized in this paragraph, and whatever obituary there happens to be out there. Of course if she had kids, that's something too.

Another reason the 58/29 stat is interesting to me is, I just happen to be 58. I've been feeling oldER for a while but I've been more openly calling myself old since I turned 58. So maybe I'm more typical than I like to give myself credit for.