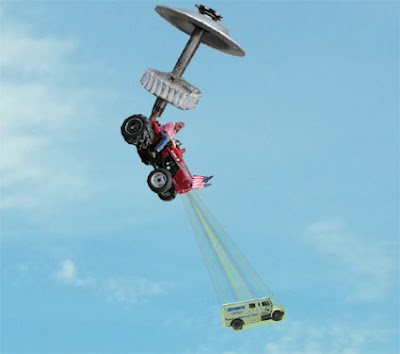 I've been very jealous of the international attention Harold Camping got for his rapture prediction, months and months of attention leading up to it, then of course tons more when the big day arrived. All indications so far point to his prediction -- in spite of his 100% rock solid guarantee that it would happen -- as being false. It could be that he needs to start predicting safer things, like who the Republican presidential nominee will be in 2012. If he says Mickey Mouse, he won't be too far off.

Anyway, I thought maybe I should jump into the game of predicting things. Then let the chips fall where they may. If there's the potential for panic, so much the better. Nothing gets people's attention like a mortal threat, then couple that with a financial meltdown. It's the perfect recipe for disaster, just what I need. I'm rubbing my hands, thinking of all the money I'll be making off Google Ads, which I will reinstate on my blog when the day gets closer.* But for a while I want to appear like I'm not trying to profit off everyone's misery.

But the rapture? It might be a little soon for that. Who's going to believe in the rapture anymore, after this guy's failure(s) and everyone else's? Although, now that I think of it, I actually did predict the rapture, building on Camping's data, but since the date is pretty far off -- 2032 -- by then I could very well be dead. And unable to cash in.

And I don't want to predict anything too routine, like Santa Claus coming on Christmas. The Weather Service has that one well in hand, even tracking him on radar, with NORAD's help and the Air Force escorting him. You know, I really could predict that the North Koreans will capture Santa when he enters their airspace. Or easier yet, when he goes down the chimney at some kid's house. Then they're torturing him, like they did with the Pueblo crew back in '68 -- did I say torture? Of course I meant enhanced interrogation, which is a much more polite label for it. We wouldn't want anyone to get in trouble, except we're not talking Americans here but the North Koreans, so I guess torture is still a good word.

Anyway, here's my prediction. Which I thought of just today when I saw the Brinks armored car go by, seen in the photo. It said Brinks has been in business for 150 years. Isn't it about time that someone messed with them? Who better to do it than aliens from outer space? We've been extending our reach into space, just like they said in the movies from the '50s, and naturally that can't be good for advanced civilizations, since we're such barbarians. So it stands to reason they would want to come here and destroy us, starting with our financial system, represented by the Brinks truck. Brinks doesn't show up at banks, people don't have money, we'll be looting in no time. Then eating each other, with cannibalism on a large scale.

So here's my prediction, and I'm not hedging my bets. Just like Brother Camping, this is going to be 100% guaranteed. I'm staking my substantial credibility on this being true, even though I'm quite aware that I'm simply making it up, pulling the date and place out of thin air, simply at random. That's the way inspiration works. If you put too much thought into it, that's when the mind's delusions take over. But if you just intuit it and say it, it's always true. Like your first guess on test questions, the mind knows.

I predict -- and I guarantee it -- that at 11:38 a.m., on Wednesday, August 17, 2011, in every time zone around the world at 11:38 their time, that space ships will appear over the earth, each having a powerful tractor beam (like pictured), and will lift armored cars from the ground and do something with them. What they'll do with them doesn't make any difference; they'll be gone! There'll be so many runs on banks that the bankers' drink of choice will be Kaopectate. It won't be long till they're wiped out. Then total and complete collapse!

Spread the word, gin up the panic, let's get this thing going. What's that I hear? I think I hear the ships hovering above me right now! Yes, yes, it's them!

*Update - An obvious problem I didn't think of is this, what good will my profits from Google Ads be if there's no banking/financial system left?
Posted by dbkundalini at 5:07 PM