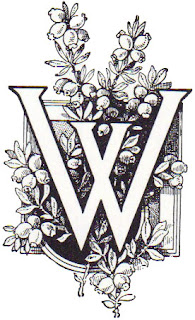 hen you use a big ornamental letter like that, you need to know in advance what your first word is going to be. There's a lot of planning that has to go into it. The letter needs to be scanned, cropped, and touched up, at least the way I do it, since I don't have the entire alphabet in that font, or any other ornamental font as far as I know.

It's a big honking thing, isn't it? A real artist had to come up with that, an artist good at rendering likenesses of fruit, looks like lemons, and one who knew how to make a decent W. In this case, I love the crossed bars in the middle, almost literally a double U, or the best you can expect from back when they used Vs for Us.

Double U, that's a weird letter when you stop to think about it. It's the only double letter we've got. Twice as many Us as a U, a clone of itself, or twin. Two twins, the first one, then its handsome double. Joined at the hip, no way for surgeons to separate them. A siamese letter.
Posted by dbkundalini at 8:11 PM