The Pink Professor -- Concerned About Our Health 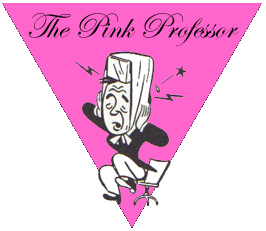 (I cheerfully add this post to the corpus of my Pink Professor oeuvre. Today is the 13th. This was written on the 12th, but because Blogger was down till today, I had to hold it. So if it feels like it has more of a May 12th vibe than a May 13th, that is the reason why.)

I guess I haven't written much about me and the Pink Professor lately. Sometimes it's uncomfortable getting so personal, with my whole life on display. There's definitely nothing wrong, that's for sure, if that's what you're thinking; everything continues on in a great way; we're still two old slippers very much in love, to use our pet phrase for it.

Being old slippers, with the emphasis on old or aging, we've always got concerns about each other. Before we met, I thought I truly had enough concerns just worrying about myself. Now it's all doubled -- it's hard to believe I can cope at all! -- but the upside is at least there's someone to share it with. Plus, that's what love is, looking at another person's aches and pains, even cancer if it came to that, and being there together.

I just had some dental work done. I think I wrote about it (looking around I don't see it). I have a tooth that's now a king, since it has a crown. King Tooth! It went bad, breaking off while I was eating something like a granola bar, so the dentist had to crown me. The Pink Professor of course needed to be in on all the anxiety of those moments, since I had a few days for my tongue to wander over the original bad tooth when it broke. He also encouraged me in the unpleasantness of going to the dentist, assuring me that it's never as bad as you think. Which is true, although the actual truth is it's still pretty horrendous.

We shared some coping pointers -- and I guess I could throw one or more out. For me, the dentist chair is a place to longingly seek out the divine, I'm driven to it. You think how coldness touches a nerve, or a drill touches a nerve, even with the deadening, and you can feel something. Just as fast, you can connect with the divine, since the body is a congeries of psychic centers with an overall microcosmic oneness. And as long as they're suctioning out the debris, you're free to focus on higher things. So to focus, that's our coping pointer for the day!

We ask each other how your health is doing. Any aches and pains out of the ordinary? Have you completely gotten over the bronchitis? Cough, cough, apparently not. How did the shingles vaccine go? Does your arm still hurt? How close to 10 years has it been since your last tetanus shot? Is this the year for your TB skin test? Does cancer run in your family? Heart disease? Are you mortal or immortal? What about a colonoscopy?

We had a joke about The Colonoscopy From Hell. I'm at a Fall Festival bobbing for apples. For some reason, I'm nude at least from the waist down. The doctor creeps up behind me for an ambush colonoscopy. Pretty soon I have a big pointer coming out my mouth, hitting the water, interfering with my ability to bob for apples, but thanks to the pointer I'm able to impale a few.

The Pink Professor recently went in for his yearly physical, which is something worth talking about. Who knows what women go through in a physical? I don't know. I'd suppose there are things that are unpleasant. Certainly for us guys, that's true. He really didn't have to spell it out for me, the prostate test, the turning of the head and coughing. I actually feel more sorry for the doctor, who must hate the whole procedure on multiple levels. If he or she gets the wrong patient, they might sue for sexual harassment. But the average patient simply hates it, meaning the sensitive doctor has to hate it too.

I mentioned being mortal or immortal. We both believe there are elements that are immortal, but whether there's a continuance of the same personality and ego, that's at least doubtful. If we're just part of a cosmic soul stew, to me that's fine. It should be fine to anyone, since what is is, and there's no getting around it. Wishful thinking won't make it different. Meaning, if we continue on with the same mortal consciousness we have now, and it's even so uninterrupted that someone has to work at it to convince you that you're dead, then that would have to be OK too. I go back and forth on the subject.

We'd love to be together forever, but right now we're content with "till death do us part." And not a second more! So no one be upset if I show up at the funeral with a date! (That's a joke.)

But those are very heavy things, say one of us got cancer and died. I honestly don't mind very much, just looking at it realistically. Still, it's nothing I'd choose. Those are heavy things, but our biggest concern is the day to day stuff, sore feet, sore knees, a pain in the abdomen, too much earwax, not enough earwax, a rash, an odd pimple, hair loss, accidental scrapes of unknown origin, and bumps and bruises. I got a blood blister a little over a week ago and it hasn't gone away entirely. So that's something to talk about. He says I should lance it, but I say there's nothing there to lance. It still hurts a little if I press it but it's far from agonizing.

This is the life of love, all the miscellaneous junk we suffer together. It's not all roses and fine wines, dancing and galas. The typical stuff of love is what hurts now and what do I have to do to make it go away? We're like old cars, piles of rubble waiting to happen.
Posted by dbkundalini at 12:37 PM