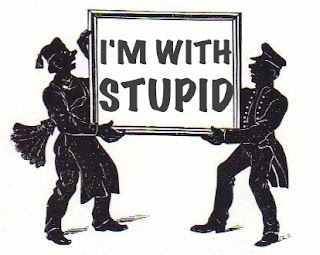 I like to think I'm a reasonably smart guy. All depends on what you mean by reasonably. It's definitely a qualifier, in my opinion meaning, "By ordinary standards, nothing fancy, such as putting me up against Einstein or Hawking, I'm smart enough to get by in typical human settings without sticking out like a sore thumb for being stupid."

It's all relative. Although I suppose you could make the case that since everything's relative that nothing's relative. But if we have have even one guy who's smarter than another guy, which is easily demonstrable, then obviously there is relativity in this important matter. So the other guy has to be stupider. He's stupid, just maybe not the stupidest guy there is.

What's the chances of the first stupid guy you meet being the stupidest guy ever? The chances of meeting the stupidest guy ever are slim. Of course if you eat a lot of fast food, you have a better chance. If he messes up your order, even a simple order, maybe you've found him. I tend to be more lenient, more merciful in these cases, especially if I'm thinking. Because maybe he had a fight with his girlfriend before coming to work, or his car's getting fixed and he knows he can't afford to pay for it, or his child support is due, or his kid is sick or something. That would explain why doesn't realize a Number 7 comes with coffee without being told. Still, if he's able to function at a job at all, he can't be the stupidest guy in the world.

Anyway, let's say you find a really stupid guy -- and he's not only apparently stupid because of troubles with his girlfriend, his car, his kid. Chances are you could find someone stupider, given enough time and the freedom to travel. So this guy is stupid, but he can tell you someone stupider. And that guy can tell you someone stupider yet. And that guy knows someone even stupider. We keep tracing the line of stupid people from this one particular branch till we find their stupidest guy. Then even he knows of another branch where the smartest guy is stupider than him.

I'm reasonably sure that you're never going to find the absolute stupidest guy, because at some level it's going to just be a pool of brain dead people who are identically stupid. If you got there there would be nothing really to cling to to quantify their intelligence or lack thereof.
Posted by dbkundalini at 10:07 AM