The Imaginary Stud -- Your Biological Clock 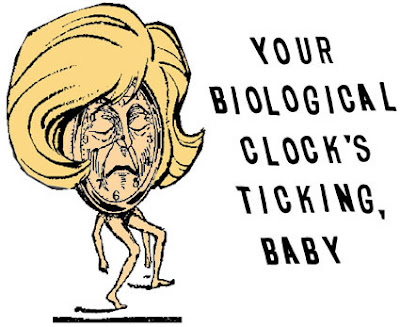 I'm a little reluctant to put this out there, because it's killer information. The actual secrets of our species are contained herein. And putting it out there as I am, it could have consequences I'm not prepared to deal with. Such as a terrible backlash, for obvious reasons: The average family doesn't want their sons and daughters hearing this. But I'll just hope I'm not too badly dragged through the mud for it.

If you're reading this and getting hot under the collar, please realize that I myself didn't make it up. And I'm not responsible for the consequences. Although, think about it, if there's a sudden baby boom, a population explosion thanks to me speaking up, it'd be kind of cool to have an entire generation named after my blog, The Grandma Slump Generation. Looking at it that way, maybe I don't feel so bad. Let's get this party started! Just because you came with one guy doesn't mean you can't leave with another! I better get a grip, because it's that kind of talk that really could get me in some serious trouble.

It's this guy I know who told me -- whom I call the Imaginary Stud, because I'm not sure his exploits and conquests are 100% true. But even if I'm not completely sure he's really the father of most of the babies in this area, as he claims, what he says does make a certain amount of sense. I'm a Human Environmental Scientist, and my gut feeling says there's something to it.

In short, here it is: The Imaginary Stud says the in he often gets with women comes after some discussion of their "biological clock." It was a secret to me, but apparently this is the Number 1 button, or source of anxiety, with women. It's not, "I love you, Ginger, let's procreate," as sexy as that sounds. It's not, "You remind me of my sister, let's have a non-cross-eyed rug rat," which is somewhat less sexy. And it's not even, "You've got me so hot, baby, I've gotta have a baby with someone, how about you?!" Desperation is so overrated.

No, it's none of that. According to the man, and he seems to have the confidence of experience, if you casually say something about her "biological clock," not in the heat of the moment but a day or two before, she's going to be mulling it over time and time again. She might laugh at first, but when she's alone, she'll be looking in the mirror for wrinkles, checking her body for any unusual sagging, and, most of all, flushing her pills down the toilet. She might try telling herself, "I'm only 19!," but it'll be only temporary relief.

It's kind of sad in a way. If only she hadn't been tainted by the idea of her ticking biological clock! How much happier she was before he said that! Now there's no recourse but to call the fine, young, intuitive, wise gentleman who obviously knows so much about it. If he brings flowers, who cares? If there's foreplay, who cares? I can't waste another second! I'm virtually dead. By the time my baby's 18, I'll be in my upper 30s! Where have the years gone?!

All this time, of course the Imaginary Stud is expecting a call. And ... "like clockwork" ... there it is! ... The phone is insistent; it jumps out of his pocket. "You wanna come over and ... watch TV ... or something?" she purrs. "I just checked Netflix and it seems to be working." That's rare, he thinks, a sign from above. Then he remembers, We won't be watching much TV tonight!"

We'll follow him just a little further. He gets there. And he is sweet. He has a bouquet of flowers he picked from her yard. But she still very well might back out. It's here that he treads a fine line. If he meets the slightest bit of hesitancy, he will not -- I'll repeat that, he will not -- mention her "biological clock." But he will use the word "clock" a few times, spaced over time. Such as, "That looks like an antique clock, an old one. Gotta love the old days!" Or, pointing at it, "Time really flies. Always later than you think."

She gets the message and there's no more delay. And now, pretty soon, she'll be thinking a lot about time, months, trimesters, etc. While the Imaginary Stud has skipped down the stairs on his merry way, brightening the lives of many others as he makes his frequent stops.

Note: Check my archives for a few more posts on "The Imaginary Stud."
Posted by dbkundalini at 12:52 PM