The Imaginary Stud -- What's In A Name? 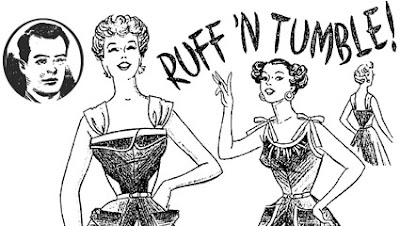 So the Imaginary Stud was beaten to a pulp and his two front teeth knocked out, and of course he was upset. But I used some of my great people skills to calm him down and send him home to find a comfy chair and settle in with a good book. I told him I'd come check on him.

When I got there earlier this morning, he was stretched out on the floor. The blanket was half on him and stretched to the chair. On the nightstand I saw evidence that he had been trying to drown his sorrows with a half can of beer. How sad. He looked every bit a dead man, the illusion only broken by his rough snoring and violent thrashing about. He was obviously reliving the experience of the deranged sister and wild bulls who had put him in this sorry state.

I shook him and gently called his name. He came up fighting, swinging his fists, and had a hard time breaking the dream's hold. But he finally realized it was me and settled down. "What time is it?" he asked, provoking me to mercifully relieve his curiosity as to the hour of the day by glancing at my cellphone and faithfully conveying the information back to his wondering mind.

He got up, went to the bathroom, did his personal cleansing rituals, then came back and went into a whole yoga/exercise regimen he follows. But before that, he tossed me a "Composition" notebook that he uses to keep track of his dates. He motioned me to open it, which I immediately saw was his way of convincing me that everything he says about his conquests is true.

Indeed, it appears that maybe he really is the father of a very large number of children in the community, assuming the notebook itself isn't part of the ruse. Until I know for sure, I will continue to refer to him as the Imaginary Stud.

He kept the yoga exercises going, bringing his hands together, dangling his foot, breathing in/breathing out, and stretching as I quizzed him on some of the names.

CARMEN -- "She definitely sounds hot," I said. Carmen is a fiery name. I'm sure she was with him every step of the way, a gal who could keep up and give as good as she got! If she had red hair, I wouldn't be surprised. And if she did, I'm sure she had everything that goes along with it! He gave me a gesture that said, "I'm not that good at names, but you're probably right." The two scratch marks indicated twins.

KAYLA -- She sounds like a handful, just going by the name. I'm thinking of kiss, ecstasy, la-la land, and climbing the walls, Kayla clawing his back, Kayla calling out for more, more, more. "Where do you find these chicks?" I asked with a laugh. He kept up the yoga, only gesturing as if to say, "It's really nothing, dime a dozen." There was only one scratch mark, so that'd be a litter of one.

ESTHER -- I'm thinking, Esther? "Come on, you gotta be kidding!" I said. And yet, I got a hold of myself, names aren't everything. She wasn't responsible for her own name. If he had her in the notebook, she must have somehow raised herself above the limitations immediately suggested by her name. I started thinking, maybe he's not kidding me, because what's the chances of him putting "Esther?" If it were all a scam, surely he would've come up with something a little sexier, like Mildred. Be that as it may, there were three scratch marks, so at least she was fertile. Traditional girl from some little village, her first date, stoved up with eggs.

TAWNY -- OK, Tawny, now we're back on good soil. I can well imagine him meeting and sweet-talking a stripper into submission. Of course they can be the toughest cookies to crack, having had all kinds of bad experiences with the male race. But a charmer -- whose charm is real and doesn't quit -- is all it'd really take. And a sweet promise: "I'll take you away from this life and share with you my riches." She'd fall into his arms. Then a quick trip back to her place at the Pine Cone Motel, a roll in the hay, and an angry goodbye. She was good for a single scratch mark, a single kid to keep in the dressing room, sucking his pacifier while Mom grinds out another set.

I thumbed through the book, estimating there had to be at least a hundred names. But his exercises only took 15 minutes, then he needed to get out, see the dentist about a couple of implants, and perhaps work in one or two seductions before lunch.
Posted by dbkundalini at 8:23 AM