The Pink Professor -- The Importance Of Shaking Hands 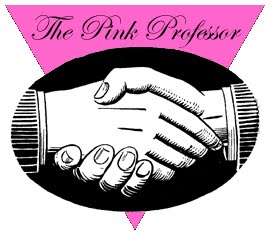 Things at the Roadhog Roadhouse have been going as usual. Guys show up, guys drink, guys get in fights. It can be so bad, I hate to think of it, what ruffians do.

I just hear of it, since I don't go out there much, and I shake my head and inwardly wonder: Why is the heart of man so against his fellow man, especially when he's got a belly full of beer?

But I have to smile, since I know I have a man on the scene to handle these matters, the eruptions of one man against another. Of course that's the Pink Professor, who can't be there all the time, but when he is, things get straightened out real fast. He doesn't take any crap from any of them.

Gotta love him! And of course I do! Our relationship, you will recall, goes back now more than a year! And what a year! We met a year ago in September. And now September has come and gone again, October, too, and we're already into November. We've quit celebrating monthly anniversaries, which is usually the way it goes. Of course we weren't an item right away, but still once we became one we started looking back on those months as counting. Certainly they counted for the one year anniversary, because it wouldn't make a bit of sense to postdate something other than our first get-together of any kind.

Anyway, the P.P. is still on the job at the Roadhouse, bringing a softening influence to the otherwise coarse atmosphere of the place. Coarse is really the word I'd use, which is why most bikers' bars in recent years have taken the positive step of bringing a Pink Professor figure on board. Sometimes they're paid, sometimes they're just goodhearted volunteers, like my guy is. He likes to make a difference, that's one thing. And another, it makes his life more interesting than just teaching classes and grading essays all night.

He was telling me of the most recent craziness out there. Remember the 14-piece pool cue the one guy had? Well, now everyone has one. Which has an interesting benefit on the side: If someone gets in a fight before getting the damned thing assembled, it delays things enough so no real damage is done. Cross your fingers!

That happened the other night. Two guys got into it over something, something to do with one of the waitresses winking at them. They were at loggerheads, staring at each other with evil looks as they hastily assembled their cues. Then one hit on a brainchild, to take a whack at the other guy with his only half assembled, seven easy pieces. He took a swat, knocking a glass of beer across the room, and the other guy backed up.

They both saw the futility of fighting with just half a cue, so back they went, feverishly assembling them, but having a harder time, because the narrowest part of the cue is the trickiest to assemble, with the smaller threads. Now the other guy got ¾ the way done and came up swinging. The other guy dodged, because one of the pieces, not screwed in fully, flew across the room and broke a mirror, meaning seven years bad luck for someone.

He went running for it, slipped on the beer that had spilled, and fell on his butt. To make a long story short, he feigned injury while unscrewing a chair leg. He came up like a pack of bears spilling out of their den, with the biggest gaping maw anyone remembered seeing, chair leg in hand, right when the Pink Professor entered the room. Then both men stood there ... silent ... ashamed ... immediately convicted of the error of their ways.

This is the power of one great man! The guy with the chair leg tried to hand it to the Pink Professor, who just shook his head. "I don't need to take it from you. You know where it goes," was all he had to say, and the guy picked up the chair and reattached it. The other guy had stopped in mid-assembly of his cue. The Pink Professor, instead of disarming him, went over and helped him get it together. "You have to baby the last few pieces," he said cheerfully. He knew they guy wouldn't fight now. And that's what happened.

He brought the two combatants together and had them shake hands, which is always an important gesture in putting past grievances behind us. Once you've shaken hands with a man, you can't bear a grudge. It's a physical and mental impossibility. You're immediately one in heart and mind. Their hands joined, the P.P. put both his hands on top, as if to bless their sacred union, then withdrew. Each man looked eye to eye at the other, their big grins confessing they should've been friends all along. Then with gentleness they broke their grip, and went on to grip, each one, another beer, each treating the other and splitting the cost of the Pink Professor's next drink.

To me, that's beautiful. That they would treat each other to a beer and split the cost of the Pink Professor's next drink.
Posted by dbkundalini at 11:00 AM