My Board Of Editors

I want to thank everyone for their applications to join the Grandma Slump blog in an official capacity.

When I first had the idea, some weeks ago, I was apprehensive, thinking maybe no one would apply. Or just a few internet scoundrels and ruffians trying to cause trouble. But I was very gratified, and frankly overwhelmed, when the applications started pouring in. I didn't count them all, but it had to be several hundred. The fact that you took the time to fill out a 70-page application, and did it with such optimism, and most of you with such false hopes from the get-go, is something I'll never forget.

Well, today, I'm happy and relieved to say the long and involved process of getting just the right people is over! Whew! The positions are all filled. Gentlemen, I give you The Board of Editors: 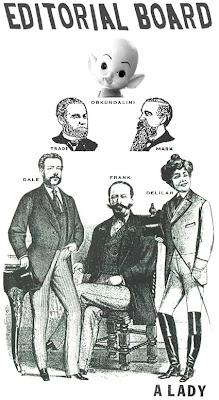 Of course that's me on top. As publisher and editor-in-chief, I keep the supremacy. It's my voice you will continue to hear, pretty much exclusively. The others are new, wet under the ears, and it's not been determined what exactly they will do.

Below me, and occupying a rank together above the last three, are two guys named Trade and Mark, the Smith Brothers. Both have facial hair, as you can see, and other talents. I put them in the middle mostly for symmetry, one on top, two in the middle, three as a base.

In the lowest position, then, under the Smith Brothers and myself, more or less in a supporting role, so far also with undetermined duties, are Dale, Frank, and Delilah. I'm not going to worry about their last names at this point. We'll first let them prove themselves fit for the job.

Dale doesn't seem as serious as Frank, just my impression. Which might come in handy, because sometimes I'm looking for someone to bounce off crazy ideas. But  Frank, being more serious than Dale, might also serve me well, since sometimes I put away the crazy stuff and am serious.

Delilah comes in for special mention for a few reasons. One, she's a woman, a lady, and that's how we're going to treat her, with respect. That's going to be my rule. And if I see any of the guys coming on to her, particularly when they're on duty, that's going to be it. I don't want her sexually harassed in the slightest.

One of my first duties, I guess, should be to come up with a written policy on what I mean. When she's in the bathroom, let's say, there better not be anyone at the keyhole. If I catch them, that's it! They'll never work at this blog or any other blog again. I'll be paying special attention to what everyone says around her. And if anyone so much as hints certain things about himself and her, he'll be gone.

Of course, if one of them and Delilah strike up a romance after hours, then somehow come out officially as a couple, at that point it will be different. I will work with them if that happens, so they'll be allowed to address one another in a loving way, etc., depending on how explicit they choose to get.

As for her duties, I will be gentle. Being a woman, I will not overburden her. She already makes a mean pot of coffee, so that's good for now. And it's nice to hear a woman's cheerful voice around the place, something I haven't heard much of since Grandma died. And I probably don't even have to say she's easy on the eyes. Something not true of the Smith Brothers, despite their higher ranking.

The artwork I have of Delilah probably doesn't do justice to her actual figure. The jacket's so tight, surely her boobs must be fairly compressed in there. And maybe it's just the pose, or again the tight clothes, but her hips don't show the kind of curves that she likely has. The long legs are just right. And the boots. You've probably heard my Number 1 statement on women's fashion: "Boots always make the outfit." I literally do a double-take on every pair of boots I see women wearing. Even galloshes.

It's going to be nice, I hope, working with a board of editors, an editorial board. I'm very possessive about the blog, as you must know. And I won't give that up easily, if at all. But as we get used to each other, me and the board, who knows how things might change? I might trust the Smith Brothers to take out the recycling.

The first thing I'm going to do at our next meeting is give them each a press pass and a firm handshake. And maybe a brotherly peck on the cheek.
Posted by dbkundalini at 4:17 PM