A World Of Wonder For Jimmy 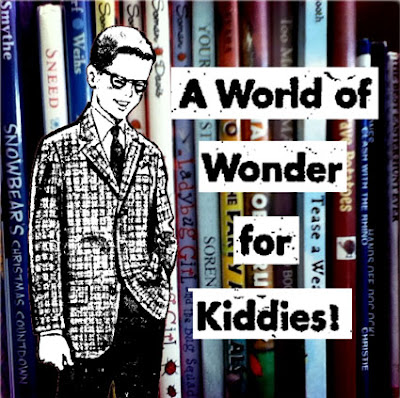 My board of editors and I left the garage where most of my blogging is done and went out on a story, to interview Jimmy. Of course Jimmy needs no introduction, if you read my post on the 17-year-old boy whose parents restrict him to the Children's Room at the public library. This is one of the library's actual rules:

My board of editors is also well known. We have Trade and Mark Smith, Dale, and Delilah. Last week we had a guy named Frank but he's since been fired.

I worked it out with Jimmy's father to set up an interview, telling him it would be a human interest story. But my secret plan was to ask such pointed questions that I knew Jimmy would rebel and insist on using the big people's section of the library. But that didn't actually happen.

For the interview, the library made us so comfortable in the Children's Room, with the little cups of milk they provided, that I also felt at home there. But for the tiny chairs, I might've restricted myself! Jimmy, though, looked entirely comfortable, having never known anything else.

Watching him before we sat down, I began to be more and more impressed. He treated the Children's Room like his own personal domain, and  I could see by the way he pulled books off the shelf that he definitely knew his way around. Yet none of it was old hat to him. It was all a world of wonder! And it's easy to see why. The Children's Room has books on giants, fairies, and all manner of other weird beings. It'd be easy to get lost in your imagination there!

Anyway, we got ready for the interview. Jimmy was behind a small table. His father sat at his side, obviously prepared to run interference. His mother was off to the side, knitting. I and the board sat facing Jimmy. Trade, Mark, and Dale were off to my left, leaving Delilah on my right to take notes, obviously the secretary.

I did all the talking for our side. The board was there to offer whatever moral support I might have needed, although I didn't need any.

I asked Jimmy if he felt the restrictions imposed by his parents had hurt him any. He looked at his dad, who gave him a helpful frown. "No,"  he said, going on to state his happiness with being able to easily read 18-20 books a day, while his friends using the whole library could barely get through one book a month. The board and I nodded. If you look at it like that, he could read through the entire Children's Room once a year while his friends were stuck on one shelf!

But I thought I'd try again, asking if he felt his outlook on life had been stunted in any way. "No," he said, first glancing at his father, saying he was aware that life was a mixed bag, with smiley faces and sad. And that's the way it is in children's books, too, he declared. Sometimes you laugh, sometimes you cry. He referred to one interesting story that I hadn't heard of before, in which the evil witch is pushed into a blazing hot stove while the children make their way back home via a trail littered with bread crumbs and pebbles.

And one other probing question. I asked if he had any secret desire whatsoever to sneak into the big people's sections of the library. I thought I detected just the slightest hesitation, but a quick glance at his dad steeled his resolve. "No," he said, stating that he felt he was presently getting the best preparation for life ahead. The Children's Room gave him a solid basis for life, and his dad would be there to help him with the rest. I couldn't argue with that, of course, since he was clearly a big help to him.

Overall, though, I had mixed feelings. One, Jimmy looked very immature for 17-years-old, but maybe that's the whole point: His parents are keeping him young! In a weird way I could envy him. I'm 58 now and feeling old, but what if my parents had restricted me to the Children's Room? I might feel 35 now instead of old!

Soon we brought the interview to a close. Jimmy's parents put a dark hood over his head and walked him to the car. I lingered behind for a few minutes, checking out some of the titles. 18-20 books a day? I thought. Amazing!
Posted by dbkundalini at 7:29 AM