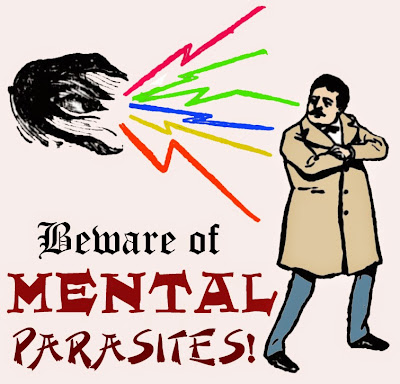 Have you heard of ... the danger of mental parasitism? Well, I have. I know so much about it that, probably, the less said the better. I have a full page of notes on the subject, two pages, as I recall. And I'm not referring to it now ... I'm winging it.

The mental parasite is a creature -- a normal human being, depending on how you define normal -- who is generally older, and knows he's on the downhill path to dissolution. The concept reminds me of movies like Dracula or another Bela Lugosi movie where the woman is beautiful as long as she keeps getting shots of young woman essence. No doubt there's many variations to it. Freaky stuff. But in the case of the mental parasite, there's no injections, no surgery, and perhaps not even a perceptible depletion of vitality from the host. I'd call it imperceptible, but I don't entirely know all the instruments that are available.

I'm not going to admit very much here. With no admission there's frankly nothing anyone can hold me on. Any victims (and I'm not saying there are any) have long since passed from my terrifying, essence-zapping stare, and are surely by now fully recovered, being completely unaware that they served as a fantastic mental feast for me, speaking strictly as a matter of "What if?" conjecture.

Why would I want to admit anything? Wouldn't that just scare off all potential hosts, leaving me very much alone in society, to waste away? Perhaps not. Think about it. The mass of people aren't going to stay home simply on the off-chance that a mental parasite -- which isn't even a recognized parasite, scientifically speaking -- might be nearby. They reason, "What's the worse he could do to me, maybe pick up fashion tips and die of envy?" In response, I say, "[Wolf calls and maniacal laughter]," before grabbing a fly from the air and sucking it dry.

Of course people aren't going to believe in mental parasitism, so it doesn't matter how much I say. Just like I don't believe the "crackpot" things I see occasionally on TV. Like ghost shows. I see the most popular ghost show is zeroing in on their 200th episode. That's pretty good, 200 episodes and not one ghost! Proving you can do a show for years, failing at what you purport to be your mission, and no one seems to notice. It's the Fox News of the paranormal! Then I come along with a lowly blog post about mental parasitism, which no one has any reason to believe. Obviously I could shout it from the rooftops and continue to enjoy no lack of hosts. I love it! Honesty's the best policy, but no one realizes you're honest!

Anyway, anyway ... don't take any of this too seriously, OK? My phrasing there was all in fun. If you took it seriously, that would be bad for my image, and, again, potentially for the number of hosts, and my personal freedom. The last thing I want is to be brought before a judge on charges of mental parasitism. Let's say, though, that they've got me sitting there, waiting for the previous case to be finished, and I'm mentally sucking dry the judge, jury, bailiff, sketch artist, and recorder. I've got all that prime essence, they're slouched over the bannisters, and I'm breezing out, till my next arrest, which, being a hungry soul, I hope is very soon! Judges have a lot of great essence, they say.

If I can be serious for a moment, I honestly, actually never do mental parasitism activities. Not that often, barely any, you know, unless I see someone bubbling out the essence. Which happens only occasionally. The mass of men and women, living their lives of quiet desperation, have nothing I really want. It's that occasional person, though, just dripping charisma... You see them with your eyes almost closed, like looking through a feather, and you literally see all kinds of things: colors, excitement, multiple body sheaths, radiance streaming forth from the crown chakra ... Yes, it can be too much. Surely a little taste wouldn't hurt...

What a sad and lonely life it is, though, in the (hypothetical) aftermath, when you're alone with your thoughts. You're in bed, looking up at the ceiling, and you see the dancing of and hear the jibes of taunting spirits: "You swore off! You're weak! You're pathetic! You couldn't leave well enough alone!" Then I have to wonder, Where are you bastards from? It's either my continued, prolonged, satisfied existence, or going down the tubes! I can't help it that this is the way life is! Last time I checked, I wasn't the Creator. Take it up with the Creator if you've got a problem... Otherwise, kiss my ass! But they dare not get too close or I'll suck them in, fly away, and rain psychological terror on a world that would never know what hit it! If any of this were true, that really could happen.
Posted by dbkundalini at 4:43 PM