The Artwork of Children is Crap 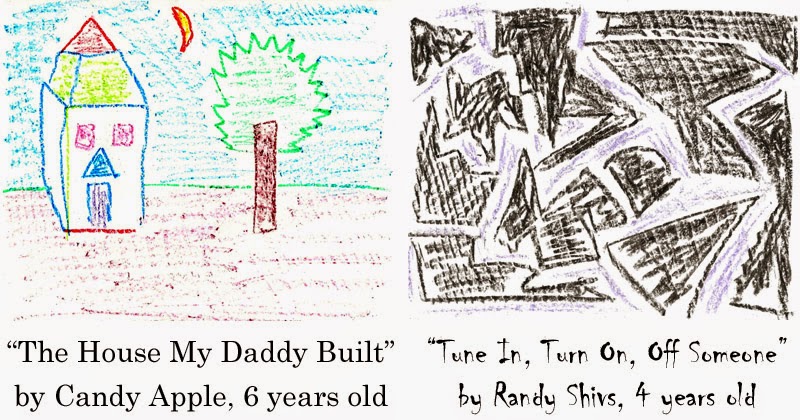 Being a community leader -- I'm related to a guy in the Chamber of Commerce -- I'm sometimes called on to perform some interesting tasks. Sometimes it's fun, like the time I picketed a local strippers club with the town pastors. The girls came out to finger us, and I managed to get in a few winks to let them know I'm actually cool with nudity and lap dances. As to some of the other tasks you have to shake your head and ask, "Why? Why? Why am I involved in this crap?" I was saying that when they asked me to judge a children's artwork show.

Judging a kids' show is a big deal, it's not entirely cut and dry. They fingerprint you a month in advance to make sure you're not a predator posing as an art judge. Which of course I'm not. I'm also not an art judge, but they're a little more lenient there. They don't really care, because, let's face it, these budding Picassos are all going to win. Their genius is unquestioned. The bad news is some of them are going to kill themselves when they become adults, because that's when the world tells you the bitter truth. The good news is their crummy artwork will only go up in value, depending on how tortured they were.

Anyway, I showed up, and passed through all the parents and their fawning remarks. They know who to kiss up to. "Please, please, people, people, get a firm grip, OK?" I sounded something like Paul Lynde, gently scolding while at the same time chuckling. Then I took my place at the front of the room, with all the garbage proudly displayed. I needed to get a grip of my own, and make a good show of reviewing the divisions for judging. In all there were 36 art pieces. Each would get a trophy. That part was easy. The rest would've been tougher, except, I will confess, I was already swayed by outside forces.

So all 36 would get trophies, but there would be two overall winners (pictured above), with only one getting the top prize. Little Candy Apple's house picture was the runner-up winner basically to make things look good. The other took top prize because of outside threats. On Candy's work, her dad apparently built a house. I took the hint of a face on the house's front to be a statement that the house was essentially one of the family. They had moved into a generic house, then infused it with the spirit of their family. Or something. The kid probably draws everything that way, constantly personifying whatever it is. Actually a real yawner.

The judged masterpiece of the entire show was the study in black by the little Shivs boy. Knowing the family as I do -- they live on the other side of the tracks, most of the kids are in gangs, and all the older men are in prison -- I can say they're a very dangerous bunch. So after numerous threats, persistently made, I judged Randy's artwork to receive first prize. Actually I showered it with awards, six blue ribbons! I'm pretty sure Randy regularly gets high, and I can imagine him now at my door, a stub-nose in hand. But I don't believe he'll forget the favor of six ribbons.

At the end, everyone came up for their awards. And of course we presented the art teachers from the various schools, who also wisely congratulated Randy Shivs profusely. A kid like that will go far. I know if by some act of God he and his delinquent family were to move far from this town we'd all be overjoyed. And with six ribbons and several trophies, maybe he'll qualify for a scholarship abroad. He'll certainly get every recommendation The Family wants. And if the Chamber gets involved and turns to me, I believe I can bullshit some decent letters on his behalf.

Note: In addition to first place, I judged Randy's work most colorful, most creative, most apt to curl your teeth, and overall the utterly most superb and excellent -- the top dog -- to be praised in all known languages of this and all other possible worlds.
Posted by dbkundalini at 7:17 AM