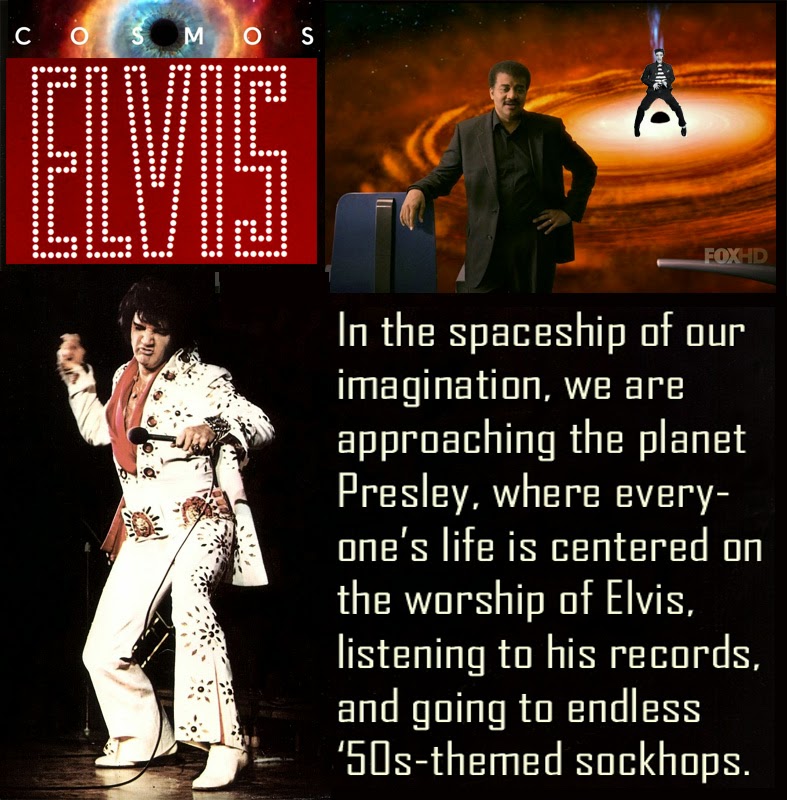 For a while I was watching the Neil deGrasse Tyson "Cosmos" show religiously, and really getting into it, traveling across great vistas of outer and inner space, but getting back home in time for dinner. It was great, it really was. Then I got to about episode 9 and read they were only going to make 13 episodes, I was floored. What?! I thought it'd go on for years, but they're bailing at 13! That was a huge letdown, so I haven't watched the rest.

Why wouldn't they just keep exploring the wonders of the planets, the stars, the world, just on and on? What is this measly 13 episodes? Then I learned that Carl Sagan's show also was only 13 episodes, which I never knew; I never saw it.

As you can see from my graphic, I also had high hopes that one of the wonders Neil might cover would be my personal hero in life, Elvis Presley. There's no person, place, or thing greater than the King of Rock 'n' Roll. And I speak as one of the world's first (and youngest) Elvis impersonators, since I was shaking my booty and belting out "Hound Dog" when I was just 3, in 1956.

Lest anyone disagree, please take into account, each of us is a part, even integral, to the cosmos. But not everyone's the same: There's me, there's the president, there's the guy begging downtown, there's murderers, there's everyone else, but not one of them is or was the great Elvis Presley. No man could be Elvis but Elvis, and no one is as great. When the cosmos got done creating Elvis Presley -- I believe it was on the 8th day, after God had a rest on the 7th day fit for a king -- it was pronounced perfect. Then the rest of us, the various mutations making up us, were created and/or evolved from the ooze.

Someday, when it's almost my time to reenter the ooze, I want everyone to wait outside -- family, friends, readers of this blog. And I want the death nurse to bring me an iPod with Elvis songs. Then, at that grand moment -- even though I'm feeling like total crap -- I will spiritually be revived when I hear the greatest voice in 13.8 billion years, singing me to sleep:


Lord Almighty, I feel my temperature rising. Higher higher, it's burning through to my soul. Girl, girl, girl, girl, You gonna set me on fire. My brain is flaming, I don't know which way to go.

It's coming closer, the flames are now licking my body. Please, won't you help me, I feel like I'm slipping away. It's hard to breath, my chest is a'heavin'. Lord have mercy, I'm burning a hole where I lay.

Hey, I wasn't expecting his last song to me to be my diagnosis, but that works! Shows a certain omnipotence, hardly the stuff of 'One size fits all.' To know the King's got me in his thoughts ... Pretty good.

Anyway, I was listening to some Elvis tracks just last night, and it reminded me, "I really need to get Neil deGrasse Tyson in on this. People will listen to him even if they turn from me. He could make the case for Elvis' place in the cosmos so much better than I, with his fantastic little spaceship. He could buzz the planet Presley and bring back a report that would cheer my soul, and, who knows, maybe rescue me." Those were my actual thoughts, a direct quote.

Then, someday, when I go, when it's all said and done, Elvis will receive me into the heavenly mansions, saying, "Well done, my good and faithful servant," and perhaps dedicating "My Way" to me. Since I, too, have often bit off more than I can chew.

The bottom line, in case you haven't guessed, is I love Elvis Presley. I love every nuance of his voice. Everything of his looks. Basically everything of everything. Elvis is the stuff of miracles. Think of how it went, a truck-driving kid who went from that to blow the whole world away. If Neil deGrasse Tyson has a place in his heart for every obscure scientist who discovered how to tell one star from another, surely there's a place for the greatest star of all.
Posted by dbkundalini at 7:08 AM