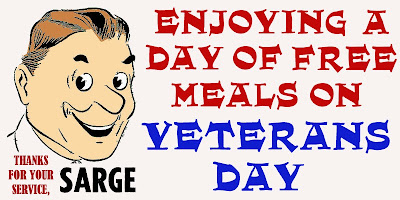 If you run a restaurant, and a veteran shows up for his free steak, but is unfortunately missing his manhood, and you're somehow able to realize this, either by sight or his higher voice, you might wonder, Could this be the guy? Let me tell you about him, because his discharge papers are perhaps not up to snuff. He's a guy Sarge had to deal with...

It just so happens that I have a friend in the neighborhood, called Sarge (Walter), who's now a handyman, but in prior years was a sergeant in Vietnam. He was just recently over at my place; I think it was last Wednesday -- could've been Thursday -- no, it was Wednesday. Several years ago he made me one of those boards that has a row of jars nailed to it in which you store screws and nails. Well, I'll be damned, but some moisture got in there and rusted the lids shut! So there I was, actually breaking one of the jars for a quick screw.

Sarge came over to make it right, since it was still under warranty. In talking, we got on the subject of free food for veterans on Veterans Day, and I know he's definitely all set. By now, at this writing, he's surely had free breakfast at one of the grocery stores. And in a little bit he'll have lunch at one of the diners, since they've also jumped on the bandwagon. Then tonight, my warrior friend will sit down for a much finer meal at the steak house. The steak house is a very patriotic bunch and they've really led the way in free meals, with the only downside being a long line. Some of our older vets have been known to pass out waiting; one year one cut his head, but insisted on his steak before getting treatment. That's the way they're trained: Mission first, personal safety last.

Anyway, Sarge was over, and I thought, "No, I'm not gonna get him reminiscing about Vietnam. Let old wounds die." But as luck would have it, we got to talking about the tables at the steak house, quite innocently, how they're always loaded down on Veterans Day, literally to the point that they'd collapse if they weren't so sturdy. This led to him telling me about another table, the desk he had in Vietnam, under which he had duct-taped a gun, pointed outward at whoever sat across from him. I can't imagine, but that's the way they did things! Because Sarge is wise.

Day and weeks passed, when, lo and behold, who comes in but this one totally crazed son of a bitch, a guy no one could figure out, just loony bins, total bananas, hopped up on who knows what, caffeine, stronger drugs, illegal drugs, killer drugs... He also had what could only be called a general spirit of cussedness. This guy had no reverence for authority, being whack, either half out of his son-of-a-bitch mind or completely. I can barely stand to hear it, let alone put myself in Sarge's shoes, when that crazy idiot came in there loaded for bear, and every authority figure he saw -- whether he knew it or not -- was bear.

The way Sarge tells it, he immediately recognized the guy for the total bad news he was, and tried his best in the precious few seconds he had to bring him to heel. But then there's that flash in your brain, that trigger that once triggered tells you you have about three seconds to live, unless... unless you're prepared to defend yourself. I looked in Sarge's eyes as he recalled the incident and I could see fire where the whites should've been. In that split second Sarge knew it was him or the other guy... And just as that bastard was coming up, as if to strangle the life out of him, in a split second, Sarge reached down and pulled the trigger, and essentially blew the guy away, from the crotch down. He still had legs, that's not what I'm saying, but ... he was subdued. They carried him out and that was it. Sarge was cleared, and now here he is, my hero. And handyman.

With Veterans Day looming, as he was leaving, I did as instinct compelled: I snapped my feet, made my posture erect, and gave him a more or less convincing salute. Gotta love 'em, veterans!
Posted by dbkundalini at 12:11 PM