Why Are Chefs So Horrible? 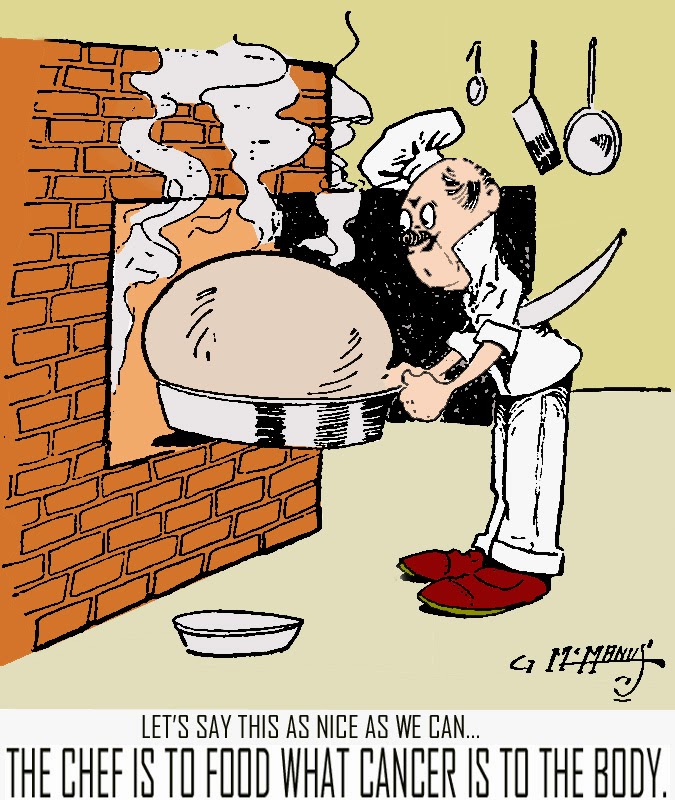 Today we're spewing venom in the general direction of chefs. For the most part, everyone's enemy. While not as bad as sex offenders, pit bulls, and jake brakes, depending on how the case is presented, still they're pretty bad. As in horrendous.

Chefs are well known as the prima donnas of the food industry. I haven't looked at the rankings in a while, but I'd say chefs still have to be Number 1, then butchers Number 2, deli guys Number 3, and bakers at number 4. I notice bakeries take a lot of vacations, which is probably why they rank lower than deli guys and butchers. Another thing that helps bakers is they often work behind the scenes and let high school kids man the store.

Of course we all justify ourselves, so naturally chefs don't see it this way. Their contention is they're professional and you're not. But their professional status is generally unnoticed, since they're right there in the kitchen with the underlings. This is part of the chef's problem. A lot of underlings are just schmucks hired off the street this afternoon. They just got off a merchant marine ship and still stink of the sea. Other professions aren't like that. When you go to the dentist, you're not sitting there with merchant marines administering the Novocaine. Dentists know their stuff. Or you go to a mechanic for repairs. The guys working there know where the oil goes, the tires, the brakes, everything.

With chefs, I've been slightly guilty of interfering a time or two. Like the time a new chef came to town and wouldn't allow 1000 Island dressing in his kitchen. No sir! I told the waitress to tell him that it's a very popular flavor. But to no avail. But then, since a lot of people in town started griping -- including influential Chamber of Commerce members, even one from my own family, guess what ... Suddenly regular food started showing up on the menu, stuff common folk eat, including 1000 Island dressing. Before that, everything had some kind of weird horseradish sauce on it.

I would've loved to have been a fly on the wall during his consult with the boss. "I am the professional chef!" he shouts. "Yeah, well, I am the professional boss, and if you don't want to be doing your chefing in a hobo jungle somewhere, turning out mulligan stew even the hobos wouldn't eat -- with horseradish sauce -- keep it up, idiot! I say we're getting new food or we're getting a new chef! Capiche?" The chef is steaming, simmering, and boiling, and before long he's well done and about had it. He blows his stack, his hat is now 6 foot tall, and pieces of him are everywhere. And there I am, a fly on the wall, splattered, a real mess. But I'd do it again in a heartbeat -- what a show!

I never actually spoke with the chef in question. Come to think of it, I don't think I've ever spoke to a chef anywhere. They're kind of standoffish. Maybe they don't want to come out and get their hands dirty so they won't contaminate the food, or they think they're just so much better than everyone else; maybe doctors feel that way. Doctors and chefs are the two careers whose practitioners appear and disappear, never to be seen outside in regular life. I remember having doubts about my own doctor even being a doctor, because I saw him once in a public park. Next time I was in he showed me his certificates and confessed he'd slipped up.

Would I want to be a chef? Not really. You make a masterpiece and it's literally crap in the morning. It's too fleeting. Then, I don't really like the stuff chefs always come up with, a million ways of glazing a dozen green beans. They have them on the plate, angled out like some kind of green Japanese porcupine, it's ridiculous. Or meat that's so small you couldn't bait a hook with it, and that's your entree. That and the green beans and a dessert to match, always small and in the center of a plate with lots of wasted space. "The presentation is the thing!" is their mantra, which doesn't mean that much to customers used to eating out of a paper sack behind a steering wheel.

I'm not sophisticated like that. I basically eat to give me enough oomph to make it to the next meal. Save the shenanigans and nervous breakdowns when I don't like it. Chefs might not be so miserable if they just made what we wanted, then received our worthless praise: "Really good, Pepe."

Just this past Sunday, to end today's entree, I was at a restaurant for the first time. I'm ensconced in my seat before I notice a giant white hat in the kitchen. At this point, with my tea already on the table, there's no proper escape.

I thought of going for the hamburger since it'd be crystal clear I was getting something else I wanted, french fries. But no, I went with the blackened catfish filet that came with a fancy salad. I asked the server if I could substitute fries. I told her I thought I saw a "No substitutes" sign on the door. She said, "Ooooooo," then indicated the chef wouldn't like it, but in the true spirit of a fighter said she'd run it by him and get it accomplished.

OK, then a guy brings out my fish and there was the salad! The chef was testing me, obviously! "Try to substitute in my kitchen, will you, you bastard!" I told the guy I had asked for fries. He went back into the trenches and somehow escaped with fries, telling me I wouldn't be charged for the salad.

I ate most of the salad -- meh -- then the fries weren't even that good. Gnarly. The blackened fish, maybe the chef learned about blackening fish in school, was also nothing I liked, and catfish is my fave fish. I have autographed pinups of catfish on my wall.

But this chef is the professional! That he can ruin even catfish proves he's good.
Posted by dbkundalini at 1:34 PM