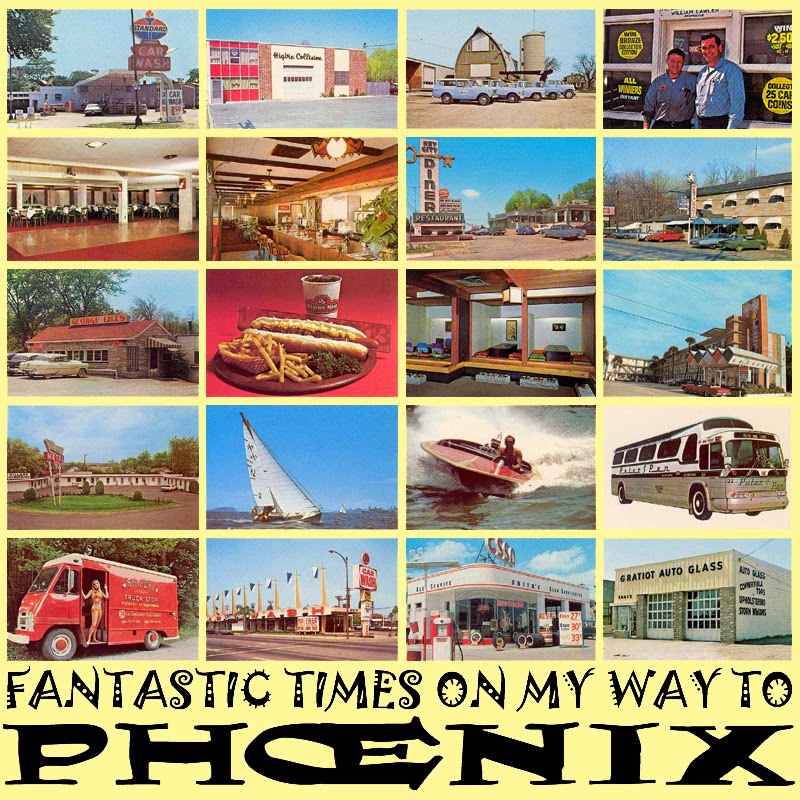 I had escaped, clinging to the helicopter. But could I really leave my own forces -- all newbies -- to the treacherous ladies Auxiliary? The pilot insisted on this, convincing me after four hours of the most intense scolding I've ever received. So back up we went, me once again clinging to the skid, and he dropped me off on top of the building.

(I shall not belabor the heroics, since my desire today is to get to my trip to Phoenix and everything I can fit in about that.)

The forces of my now-defunct new Institute of Mental Parasitism were rallied in the break room, liberating the remaining donuts from the women. I was just about to lay out a plan of action when the door burst open, and there she was -- Mrs. X! -- every bit the villainess I despised. I hated her, knowing it would either be her or me leading this Institute.

Our eyes locked. I knew this would be mental parasitism to the death, or till I left for Phoenix. I gave it my all, bringing her to her knees. But with her husband's power adding to her own, she rallied and brought me to my knees. I thought I was a goner till I rallied, mentally pushing her back on her ass with a thud. I saw desperation in her eyes, quickly replaced by a new determination. She mentally pushed me to my ass, our eyes still locked. I felt myself being completely drained, but fought back, shooting daggers. Her own daggers, however, alas, were sharper and I was propelled back, crashing against the wall.

My brave forces dashed in and dragged me away. And so, all was lost. The pilot cradled me like Michelangelo's Pietà, then we got the hell out of there. Mrs. X shouted, "I'll get you if I have to search a million years!"

Since then I've managed to make it pretty far, hitchhiking to Phoenix. Right away I got a ride with an old farmer who said, "Ahm only goin' up the road a mile, but I can getcha that fur, n'yuk n'yuk." Desperate times and all, I put him in my mental grasp and he ended up driving me the whole way. My grasp was so great he offered not one word of complaint.

Along the way we saw all kinds of cool stuff, motels, people, restaurants, cacti, and even a goat chewing lazily in the ditch. It wasn't tied up or anything. I saw things I haven't seen in years. This one gas station had gas at 27.9 cents a gallon. It was so cheap we filled up twice.

Now, concerning Phoenix, that's a tough word to spell, believing as I do that the "oe" was probably originally a diphthong. I need to Google it. Or find a librarian to put under my mental parasitism spell, so I'd never have to Google anything ever again. Bleh...

Let me be brutally honest, enough pretending. Friends, I'm desperate. I'm so f'in' far from home I may never get back. Mrs. X said she'd hunt me a million years! The old Institute kept the women under their thumb for so long, and even I, the original feminist male, didn't promise or show any intentions of bettering their lot. I admit, I was content to be served, with the fantastic rolls and other goodies they were known to bring in. This one old gal -- probably fishing for a husband -- made those giant cinnamon rolls, enough gooey frosting and pecans to choke on, and all she ever got was an occasional thank you. I remember nodding her direction indifferently. If she gets her sticky hands on me, I'm done!

Gotta keep running... The old Institute has arisen from the ashes, like the Phoenix I'm in. But I'm getting so tired, exhausted, and mentally empty, that even were I to find a likely host in this library, I don't know if I could manage the feeblest eye lock. A mere child might turn it around on me and have me in his grasp! Then I'd be reduced to the babbling of an 8-year-old, goo-goo'ing to the librarian about, "Whe be the Mary Poppin book, eh?" 8-year-old dialect...

On the other hand, what a terrific subterfuge that would be. Find a kid, teach him a few quick pointers on mental parasitism -- Mr. X accomplished it with his shrew -- and have him put me in his mental grasp, then when the Auxiliary catches me, they'll see I've hopelessly devolved and leave me alone.

If I could break free of the kid, then, I could roam these Arizona streets, hoping for the return of my own superior mentality. Then I'd change my name, get all the usual fake ID, and start a new life. Till then, when and if I find him, I'll be living in his closet like ET.


THE END
Posted by dbkundalini at 1:10 PM