Time to Face Your November 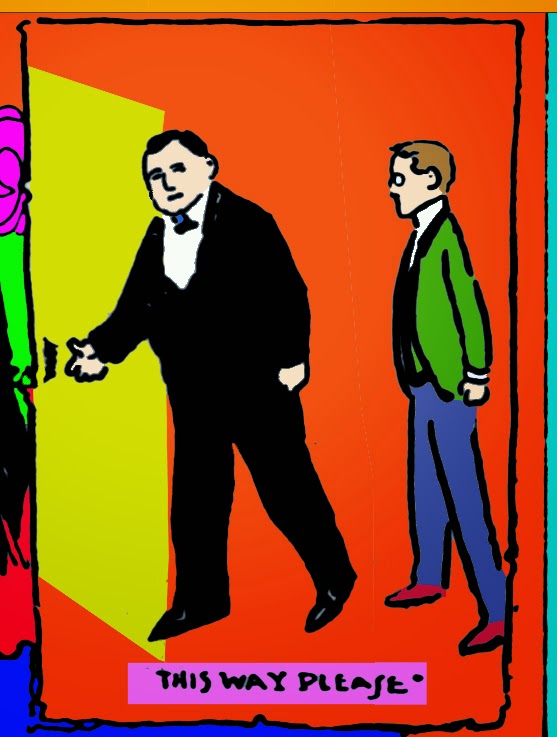 I love visions, usually. You're sitting there in meditation and maybe you fall asleep, I really don't know. I only know it all seems so real. There's planets and stars in strange formations passing overhead. You see wild symbolic figures, circles and triangles and various objects brightly colored in continual morphing. And the great figures of spiritual history, Moses, Buddha, and my Mom. I'm like, "You bastards get out of the way, that's my Mom!"

Today was one of those days. I felt like I was completely awake, because, look above, I have a pretty good picture of it. The revelations -- alas, mostly criticism -- are also clear in my mind. A kind gentlemen, very inscrutable, appeared in my room and told me to follow him. A yellow door suddenly appeared. I looked, there was nothing on it, no "For Madmen Only" sign, so I went.

Damn, if this wasn't a judgment seat type of thing going on! Just what I need, right? You think you're doing OK, things are going along good. But even then, and maybe especially then, everything is karma. Which I tend to forget till it's too late. Remember, I had the great idea to post something on my stinking blog everyday in November. So I did, posting-posting-posting, then I get up on November 30, today, and they come along to tell me ... all I did was make myself more karma. In terms of spiritual truth, you see, every goal like this is actually an insidious thing -- really bad for sensitive types -- where you realize in a flash the things you do are mere maya, delusion.

I've been through this crap before. There's not much you can do about it. Take your medicine and try better next time. But this time I decided to advocate for myself, stand up for myself. The highest part of myself, however, split off from myself, and stood across from me, closer to the judgment seat. According to it, it tried to warn me -- quote a million times unquote. "Did it try to warn you a million times? Yes or no." I stammered, "Well, yes, probably, I don't know if it was literally a million times..." "Silence! Whippersnapper..."

The problem was, according to the highest powers, for the most part I wasted my essence, which, damn, how do you argue with that? It's really true. "But!" I interrupted, trying to save a tiny bit of face, "Didn't I do a good job?" They averred, that, yes, occasionally I did all right, but sometimes it was a terrible bomb.

I asked which posts they thought were completely "suckalicious," meaning bad. They listed off, Chasing the Thrill Divine; The League of Women Non-Voters; Little Old Fantastic Me Strikes Again; and gave a few black marks for My Better Angels, which toyed with the idea of getting rid of my better angels and seeing how well I could "do it myself." I thought back and remembered those relatively horrible posts. The Thrill Divine was an idea that never blossomed, Non-Voters was inconsistent and false, and I don't even remember Fantastic Me. The beings at the judgment seat led me into an antechamber with nothing but a hickory tree in the middle. They cut off a strong switch and beat me till I almost passed out.

Back out, they told me their favorite posts. Including, Sloshing Tankards of Grog, Phones Ruint; Get Your T-Day Turkey by Drone; A Willing Man for Dillingham; That's Sexy...We're Not Moving; and, of course, Cosmos: Elvis Presley. (They love Elvis there!) I tried to make a case for my Mental Parasitism series (7 parts!), but this was judged technically adequate but overall a waste of time. Too much Institute politics, not enough actual mental parasite activity!

For the good posts I was led back into the antechamber, and this time there were pleasurable things, which were so personal I feel I should forbear describing them, except to say it was like a dozen honeymoons in Sweden, if you catch my meaning. I almost turned it down, because it's all I can do to even attempt a kiss on the first date. The thought of going all the way, and so many times, was like way too much!

They told me, then, that had they started first with the good, I would've been spared the whipping. "So why didn't you start first with the good?" ... "Didn't think of it till it was too late. Bruno started whipping you and he hates being interrupted."
Posted by dbkundalini at 2:33 PM