A Great Ranch, No People 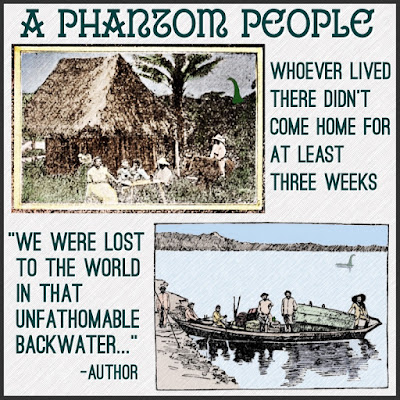 Jack brought back interesting news: "I've found a trail -- as big as Broadway!" Up de Graff was exhausted and in pain, but news of a trail had a positive effect on his weary leg muscles. He got up and went through a gap in the thicket and saw the path. It was five yards wide and a well-used trail, with lots of footprints. His instinct told him it must lead to a large ranch. Where there could be food and shelter.

About 500 yards ahead they saw the signs of a clearing, then in a few minutes they were in the open, with rows of banana-plants, yuca, yams, and sweet potatoes. The ranch (chacra) was three or four acres with a house on one corner, a big gable with sloping roof. This could be good, it could be bad. But they figured they may as well fit in with whomever and see about something to eat. Let me end the suspense by saying no one else showed up!

They really made themselves at home, kind of nasty, really, by cutting a window in the wall and trimming the ends of the place, so they could see anyone who appeared. They made a fire to cook by. There were hot coals already there. Inside there were lots of spears, round earthenware pots, stone hatchets, fire-making material, blow-guns, some masata in a pot, and a dozen stone fireplaces ranged round the sides of the building, and dishes. The fire obviously meant someone was there just recently. So they were wary about being attacked and used the weapons for security, if needed.

The explorers lived there three weeks. They still had injuries from their previous days of disaster, and tried to recover. For example, their feet were festered from the thorns, still embedded under the skin, so they used machetes trying to dig them out. It's all unpleasant, ranging from loose nails, watery matter exuding from under them, to sores between their toes with an unpleasant odor, to microbes, etc. A first aid kit would've come in handy and maybe Dr. Kevorkian. "Kill me, kill me now," I might've said.

After three weeks' convalescing, they were again exploring. They made a different camp for themselves, but still went back to the ranch for food. Weeks and months went by. They ate a land-tortoise.  Then Jack was "bitten by a bad snake and already felt queer." He killed the snake, then Up de Graff went to fetch it. Because if Jack were to swallow the gall-bladder of the snake by which he'd been bitten, and apply a ligature to the affected limb above the bite and a hot coal to the bite itself until it was cauterized, he'd be OK! Amazingly, in 48 hours he was OK, except for giddiness and bleeding at the nose and mouth. My mom was a fearsome medicine woman with a bottle of red dope, baby aspirin, heating pads, and humidifiers, but even she didn't know the benefits of snake gall-bladders...

They loaded the canoe with supplies from the ranch and pushed off.
Posted by dbkundalini at 6:00 AM