The Gods--Everyone's God A Few 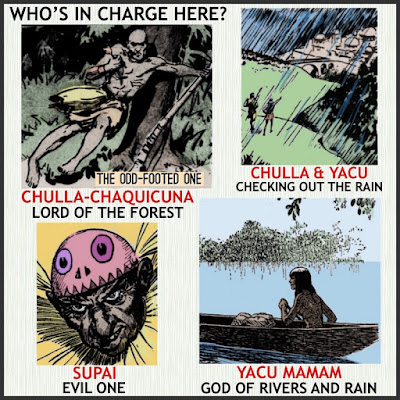 Editor's Note: I think Up de Graff has the facts wrong in this section in which he discusses the gods of the Antipas and/or Jívaros. It's a confusing section because normally I wouldn't know a South American god from a toadstool in the park. So I went to a little trouble making a collage representing these gods as Up de Graff explained, only to have to redo it (seen above) when it became clear, "Houston, we have a problem!" I have, however, retained Up de Graff's quaint spelling of the gods' names even though anthropologists and the pastors of our local churches have come up with what apparently are more scientifically precise spellings.

Up de Graff says the religion of the Antipas, as far as he knew, is simple and primitive. He says they feared two gods, the god of rivers and rain, and the god of the forest. I'm going to go by my graphic above for who's who or I'll get confused all over again. Friends, I'm an old man. I see my peers sitting by the road in lawn chairs doing nothing. I'm literally the only old man in the Big City worried about South American gods, and I don't want them to make fun of me, so please keep it quiet.

The god of rivers and rain is female, Yacu Mamam. The lord of the forest is male, Chulla-Chaquicuna. Up de Graff calls these the two Jivaro gods. To their worship "they have added a lively appreciation of the existence of the Evil One," and that being is called Supai. They attribute to him every misfortune that overtakes them.

An interesting bit here is that Yacu Mamam has the power to change from a tapir to an anaconda, and from an anaconda to a frog. Her haunts are the rivers and streams, and she brings destructive floods or beneficial showers according to her will. So those three animals -- tapir, anaconda, and frog -- are never molested by the Jivaros because of fear of her anger.

It's been a while since I worked on the graphics, but Up de Graff says Yacu Mamam is "the odd-footed one”. Somehow I determined that "the odd-footed one" had to be Chulla! So if you look at the graphic, which are only representations of these gods and not from scholarly sources, you see I gave his foot a little twist. "Come on Chulla, let's do the twist, take you by your little footsy and go like this! Yeow!" Then I paired them together in an appreciation of the rain (Mamam) with a tree nearby so Chulla would have something of his own to see. You'd hate to have a guy with an odd foot go to a lot of trouble to stumble out there just to look at someone else's rain!

One other note on Chulla being odd-footed, Up de Graff does say Chulla as Lord of the Forest as a man does have one human and one jaguar's foot. So maybe that's what odd-footed meant. However, recall above he labeled Yacu Mamam as the odd-footed one.

By the way, please don't blame me for evil intentions. Because it's not me, it's Supai the actual evil one to blame. Look at that cornball devil's picture! The representation of him makes it look like he's particularly prickly, and as for the hat, I'm good, he can have it. I'll resist temptation.
Posted by dbkundalini at 6:00 AM