Our Bullets Will Chase You 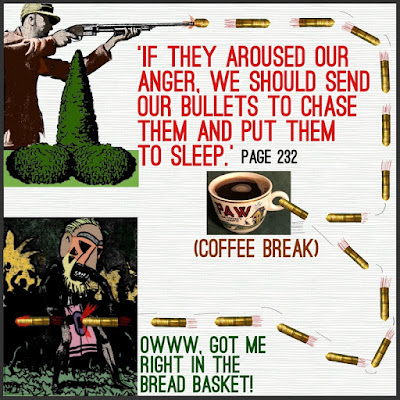 Pitacunca (the Jivaro medicine man, whom they called Pete) led the way in his canoe, making giant strokes. Up de Graff reflected on Pete's size (massive), his strength (the embodiment of strength and deviltry), and considered his own security as a white man. He didn't believe he could trust them but didn't completely believe that his rifles would be enough to save himself and team. He calls the Jivaros cunning, knavish, and diabolical, with the courage of wild animals in battle but purely looking out for their own interests. I'm myself a nice guy to everyone, but I'd rather not have overnight guests.

In a few hours they were at the western mouth of the gorge, the Pongo Menseriche. They saw some monkeys and decided to take down some for food for the rest of the trip. They were after the howling monkey, called cotos. Those with shotguns were bested in the hunt by those with blow-guns. But they still ended up with around two dozen of them. Up de Graff himself got three, but his were more of a mess (shotgun spray) than those taken with a blow-gun. We used to get rabbits with a shotgun. And it's worth mentioning one of my own adventures, cleaning rabbits while wearing my mom's fur coat. It was a mess and she was mad.

It was Pete's advice not to try the passage of the Pongo that night, but to lash the canoes together, then they'd run the minimum of risk. After dark, then, they moved a ways upstream and pitched their camp on a sand-spit. The two white men kept watch, one at a time, spelling each other every couple hours. Their biggest fear was losing their allies, "who were liable to disappear if the fancy took them." But all slept soundly. And they heard the Pongo's mighty roar on the night air. That'd be great, white noise like thunder.

They were in the luck with the river the next day. It was just right for passing back up the gorge, the canoes strapped together and a log between them. Sweeping clear of the eastern mouth of the gorge, they came in full view of their camp and were greeted by their fellow explorers. Since Up de Graff and Game were a day late, the others had almost gone out looking for them (as planned). They were also glad to see the extra plantains. And Up de Graff himself appreciated the hot coffee and milk the others had. That might've been coconut milk though, probably was, we haven't see references to cows.

Pitacunca took one glance at the camp and the explorers and turned around. He and his people retreated 20 yards away, sat down, and started a dismal wailing chant in a minor key. They seemed distraught at the sight of so many white people as well as their kit. It seemed to Up de Graff that they would never stop "yowling." They continued for about a half hour, then settled themselves by the campfire.

Up de Graff needed to wait for the water to go down at the Pongo before leaving. So for safety sake he showed how accurate they were at shooting small game, as a warning to the natives, particularly the Huambizas. Get this: He said, If the Huambizas "really aroused our anger, even though they might be half a dozen miles up-stream and round three bends, we should sent our bullets off to chase them and them to sleep." But when the natives started getting restless, the explorers decided to get going, choosing to risk the river instead of the people. You see your chance, you take it. Better to get up a head of steam than lose your own head. Let's head out, folks, while we got a head to head out with!

So they set out, and waged eight hours' war against the seething waters.
Posted by dbkundalini at 6:00 AM