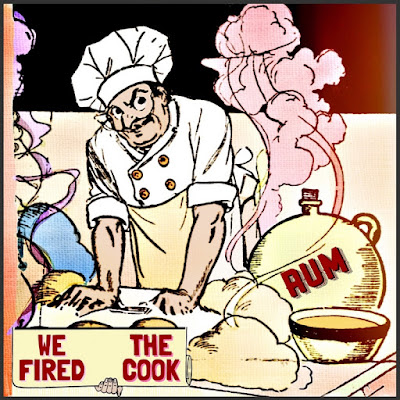 Up de Graff's expedition had use of the steamer to go up-stream as far as the steamer would go. So on they steamed, being the first steamboat in a long time to navigate the Marañon above that particular station. But only two days of hunting and lounging on the deck brought them to the highest point the craft could manage, where they necessarily stopped.

While halted and cutting fuel, Up de Graff had his first disillusionment as to the prowess of Ambusha the cook. He took Ambusha into the woods to look for game, but the latter was so incompetent at reading or making trails and keeping track of his location that in no time he would've been forever lost. For example, he looked at a well-used trail of tapirs and discerned it as having been traversed by "a war-party of Indians with women." To us that'd be like mistaking a cowpath for the interstate highway!

One other night after the steamer had returned downstream, Up de Graff's hunting resulted in four monkeys roasted for supper. They made a paste of the brains which along with hardtack made delicious sandwiches resembling paté de foie gras. Speaking of delicious animals, Jack later bagged a snow-white alligator measuring about five feet and prepared it for supper. They even had leftovers from that particular meal, all white meat of course. But we have a little bad news too, that they lost two dogs that jumped overboard and disappeared into the forest, most likely to be killed by tigers.

A little more of the Ambusha follies was in the offing. Ambusha always remained near the camp, never missing a chance to drink his fill of the rum. Up de Graff noted in his journal, "When he is not occupied with cleaning his rifle, he is busy reading up anarchism." They came to the unanimous decision to relieve Ambusha of cooking duties. Rum, guns, anarchism. They believed he was more proficient at mixing poisons than cooking, so he could be a danger to everyone.

Having broken camp one morning and stowing their stuff in the canoes, one of the guys caught sight of a tapir swimming. Jack had a gun ready, and being a crack shot, raced off and shot it, with everyone going to drag it to the river. Estimated at 600 pounds, it was of course tough to drag, but once in the water Up de Graff got astride it with a paddle and floated it down to camp. They cut it up for meat and cured it in the smoke of the fire, judging the feet and snout of the thing as being the greatest delicacies. You can still get pickled pig's feet, but as far as tapir goes, I haven't seen any in a while.

Another day as they pushed upstream they came to Borja, where a colony (est. population 100) once was. In the years since then it was overgrown and obscure. But it was still recognizable by gigantic limestone boulders, with the place being notable for its closeness to the mouth of the Pongo Menseriche, a gorge through which the Marañon River runs [Wikipedia].
Posted by dbkundalini at 6:00 AM