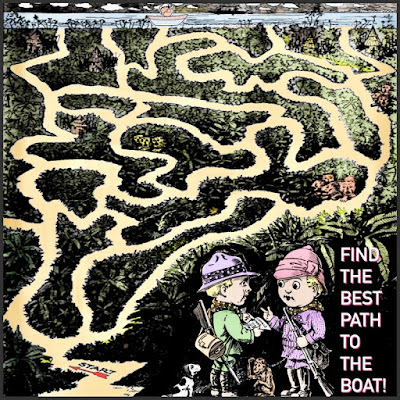 
Of course yesterday they found the canoe, but if you yourself would like to test your jungle sleuthing skills and see how hard it was, I challenge you to traverse the intricacies of the forest maze above. It's not as hard as it looks.

But something seemed hopeless, the outlook Jack and Up de Graff had after the canoe tipped. They had no hope of recovering a single thing from the deep muddy stream. The things that floated were miles away. The rifles and provisions were embedded in the silt under very deep, swift moving water. Had they tried to dive for things, the muddy current would have been too strong. It's hard for me writing the blog today to come up with funny stuff. I have a feeling this is going to be brutal.

Their immediate problem was food. They decided their only hope was to pick a trail and get going on foot. So, barefoot, no hats, only pants and cotton shirts, blankets, machetes, and a bottle of molasses to their name, they set off. Thorns gave them a lot of trouble. Then it was ceaseless rain. The ground was swampy. They slept on a more or less clear patch of ground, but woke up itching. OK, not too tough, thorns, rain, swampy, itching. OK, yes, it's tough.

On the second day of the march they swam across a swift stream twice, losing their blankets. Their feet were nearly numb from the thorns, it was nearly as bad as you can imagine. A little later they swam the stream a third time and found their own machete marks from before. They'd gone in a complete circle. It's that deja vu feeling all over. My own sense of direction's getting bad too. Where I live, to me south doesn't feel like south, and north feels east but I know 100% that it's north. This is true.

Jack joked, "If you'd only told me you were coming back for another dip, I'd have waited for you." OK, back to the suffering: On the third day, the pangs of hunger left them, but they knew they'd only get weaker if they didn't eat. They tried something from the top of a palm tree, looking like celery. But they couldn't keep it down, being nauseated. Awaking on the fourth morning, their scratches were infected, causing a maddening irritation, breaking out like ring-worms. The third day, the fourth day, everything's getting worse. Probably should've bargained with the Yumbos not to run out on them, had they only known.

They struggled ahead, Jack finally killing a turkey with a machete. But they couldn't eat it for sickness. The fifth morning they woke up in a puddle. Trying to go on, Up de Graff sank to the ground. But Jack went on, then came back excited, shouting, "Get up, for God's sake, man; I've found a trail -- as big as Broadway!" I'm not peeking ahead. I hope his news is as good as it sounds!
Posted by dbkundalini at 6:00 AM