Who Needs Mules, You Got Men 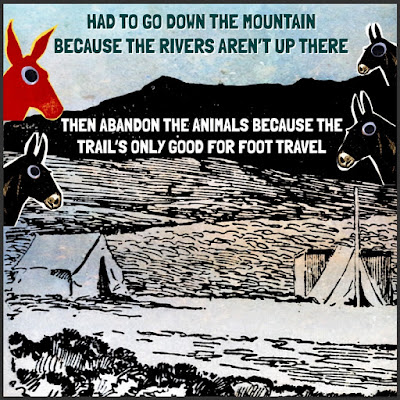 Chapter 4 of 25 -- Head Hunters of the Amazon
Jack Rouse

Up de Graff left Quito with two Indian muleteers and four mules, headed downhill for Papallacta. The mountainous area made the going rough. Arriving there, he made his way to the governor's house. He presented his passport, which the governor couldn't read. Up de Graff read it to him, embellishing the text to say that the governor was to give him eight guys to help on the journey. (They later had to abandon the animals because the trails below were only good for foot travel, making me think, How'd they get up there? They must've been born on top of the mountain by virgin birth and possibly without a mother!)

The governor responded to the president's supposed command and got eight of his best guys, apparently with nothing else to do, to help carry Up de Graff's things. They actually offered to carry Up de Graff himself, since that was other times done for priests, but he preferred to walk.

The group went down about 8,000 feet, then the Indians cautioned him not to make any noise or it'd rain non-stop crazy, in sheets, as much rain as anyone would be unlucky enough to see. But he, wanting to prove their fears folly, fired his rifle. And guess what, the rain came down in sheets. Not his best decision.

They came into Archidona where there was another governor, who put up Up de Graff in his house, where he slept well. Up de Graff flashed his passport again and said he needed a canoe and this governor was also quick to help. He would deliver a canoe for him in the town of Napo. So he -- our hero -- was ready to get going in a couple days, off to Napo.

He set off, the forests swallowing him up, and recalled again the great explorer Stanley. Up de Graff looked ahead himself to unlocking a thousand secrets of those little-explored areas, if you discount the wealth of knowledge the natives in those places had for thousands of years, which .... What can you say? .... he did.

Then at the town of Napo, Up de Graff had to wait a tiny bit for his canoe to be ready, when someone came up behind him and said, "I've heard you're pulling your freight downstream." That was Jack Rouse, who joined him in the journey.

A few things stand out in these amazing details. Just telling the governors they were to help him in certain ways when those instructions hadn't really been given, that's balls. It pays to know how to read. And how about him shooting his gun when the Indians coming down the mountain told him to keep quiet? I'm sure I would've thought those guys knew what they were talking about without making a mess for myself and the others.

And who among us would prefer to walk if you had eight guys offering to carry you? "Yes, I'm a priest, upsy daisy." Take a book, get another governor to fetch me an umbrella, read a little, maybe doze off, of course giving the strictest orders, "When we get there, put me down and let me walk in the town first, just so they know who's in charge here."
Posted by dbkundalini at 6:00 AM