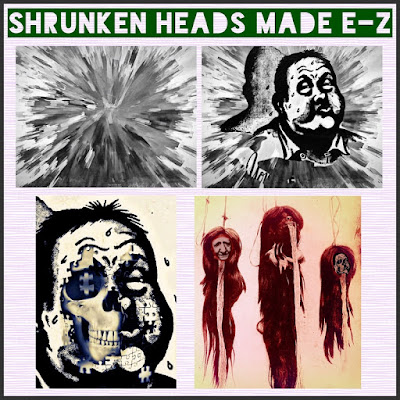 What's a book on head hunters if you never get to the hunted heads and what happens to them? The subject's been mentioned a few times but I feel like we're on the brink here of something more. What they got busy doing when they had a victory on the battlefield. Up de Graff calls the scene a never-to-be-forgotten day, concerning these relics of war. You're in for a real treat. Or if you're the kind of person who gets sick easily, and I definitely am, you might want to sit this one out.

The enemy left their dead and dying behind in their flight. The victors dashed forward to take the most prized spoils of battle, the heads of the slain enemy. They went from corpse to corpse with stone-axes and bamboo knives and other instruments to gather and string these emblems of victory. The explorers being right there in their midst were also pressed into service helping with these practices. Up de Graff says, deflecting any criticism, that "had we attempted interference, we were but five in a horde of fiends, crazed by blood and lust."

He says the stringing of the heads is an art done to facilitate their transportation. They are strung on thin pieces of pliable bark from saplings. The bark ropes are passed through the mouth and out at the neck. We've heard it in western movies how they're going to "string 'em up," but this is a whole different thing. It doesn't make it any less deadly. But in the westerns that's the process of dying, not the aftermath, which, if I recall, is being buried with your boots on.

The party next got down to looting the houses from which the defeated enemy had come. Taking everything of value. Such as Peruvian coins, cups and saucers, knives, handkerchiefs, spear-heads, etc. Then they set fire to those places and that was that.

There was another party of the Antipas who had separated from the others earlier, storming a group of huts up the creek. That other group was on their way back to rejoin the others. They were laden with nine heads of the enemy, some tied in pairs by the hair and slung round the neck of their conquerors. Gruesome enough for you? This procession was led by a diabolical-looking creature, described by Up de Graff as "a short, fat savage; laden with his share of the spoils, grinning in triumph, with his teeth stained black and filed to a point, his thick-set shoulders spattered with the blood of his victims..." Sounds like a real sweetheart.

Up de Graff reflected on how these spoils of war would eventually be displayed in the glass cases of a great museum or be included in the collection of a curio hunter somewhere in the world.

The procedure of crafting a shrunken head is spelled out in some detail on page 276 and following. There are free PDF files of the book, and if you search therein for "The ceremony commenced with the placing of the heads in the sand" you can read all about it. I however am excused from any and all blame for what you do with this weird knowledge, and ask that you don't tell me what it is. I will leave it as your own business, between you and your clergyman, and of course the local police. But, crap, the detail! I'm about to be sick.
Posted by dbkundalini at 6:00 AM