The Night Before War 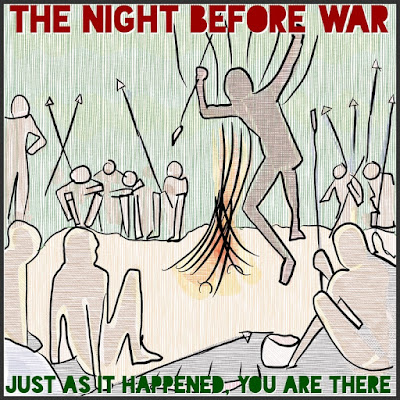 A native leader, Tuhuimpui, confronted the explorers, "We have heard that you have come searching for gold... You will be killed, so we have come to help you back to safety." Up de Graff responded that they could take care of themselves. The leader replied, "We will help you ... Let us join forces..." Up de Graff believed Tuhuimpui's object was the same as the others, getting his mitts on the canoe full of presents. But they still made a bargain.

Tuhuimpui's escort gave the explorers some 200 men from tribes joined in a common mission. The first day everything went great. They had plenty of choices for meals because of the natives' hunting skills. Then day after day they pushed upstream. Nightly the explorers watched the natives with the same suspicion that they were trying to get possession of their things. But they tried to stay diplomatic. I'm imagining they'd be like, "Can I watch your canoe full of presents?" And we'd be like, "No, thanks, I'm good."

As far as exploring went, they made some interesting experiments with electric eels. The eels are so charged with electricity that you can't possibly keep hold of a metal instrument if you make contact with one. When Up de Graff tried to cut the head off an eel the machete flew out of his hands and his arm was temporarily paralyzed. Electric eels, though, make delicious eating, no cleaning necessary. Slice one like you slice bread and they fry up pure white and firm. How would you like to eel up a feel? I mean, feel up an eel?

Tuhuimpui and his men had now been with the explorers two weeks. Around then they started gearing up for war against the Huambizas. Tuhuimpui's tone was grave. "Now indeed we shall return with many heads." That evening a few from Tuhuimpu's Jivaro force went to spy out the land. Later Tuhuimpui came to the explorer's shelter with a gourd full of dark paint, or stain or dye from huito, a kind of walnut. War paint. The explorers also joined in, right down to darkening Jack Rouse's bald spot! And the scouting party returned. I'm eager for this, put our heads together and come out ahead.

The Indians began preparing themselves for the war-dance. Then came thunder and rain. In a half hour it passed. In the morning they had breakfast, then the time came for the attack, Oct. 27, 1899. The group split into two parties, with the explorers bringing up the rear. The Huambizas were right there ... somewhere. With a great yell, our attackers leapt from their cover and rushed into the scene of the slaughter. But it turned out to be not what they expected. They didn't fire a shot in either attacking or defense. The scene of action revealed only a handful of men and women natives apparently milling around.

Anyway, that was a real downer, but I guess the chapter had to be what actually happened and not the Battle of the Ages, the Battle for the Head of Every Huambiza SOB. Anyway, "Give Peace a Chance," I guess.

P.S. One other nugget of information: The explorer named Game lost his shoes in the mud and only one was ever recovered.
Posted by dbkundalini at 6:00 AM