Crabs? Sit On My Face 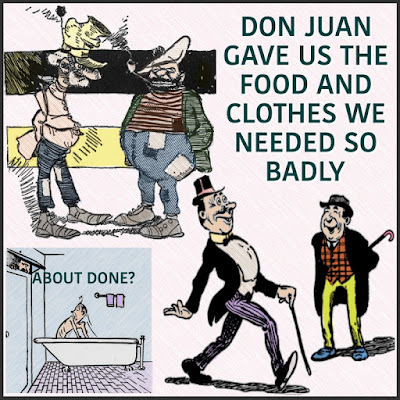 Chapter 10 of 25 -- Head Hunters of the Amazon
Highway Robbery

Reunited, Up de Graff and Jack struck out for Iquitos. Up de Graff summed up their feelings: "A life which we had endured so long had become intolerable." They had found some rubber and stowed it in the canoe with their other belongings. That was good. But then ten days of the trip were characterized by a terrible struggle for food, to the point that they were making do with odds and ends. Certainly finding a stray yungaruru nest with eight eggs is a decent haul, you can't depend on a steady supply.

Among the pesky "adventures" no one would like to have were: A land-crab sitting on Jack's face, and since he was unable to see it it could've just as easily been a scorpion or big spider; most of the rubber was stolen from the canoe; they confronted the rubber thieves by gunpoint, warning them that next time they might just mistake them for monkeys, which meant they be "shot on sight."

Along with the other discomforts was the sun itself. They had little protection from the sun in their raggedy clothes, bearing down on them and reflected on the river. Jack peeled off three or four skins within a couple weeks from sunburn. Then add the mosquitoes and gnats, hey, it'd be tough to be travel agent for this place. But the terrible suffering wasn't over. Let's throw in the "black smear." Insects swarmed in clouds day and night, sometimes settling on their bodies in such numbers that they left a substance on them, a mosquito-paste that'd be left on their hands after wiping bugs away. They called it a black smear.

A day or two later, though, right when I was about to take them some bug spray by time travel, they drew alongside a steamboat. They spoke with the owner of the craft, Don Juan Abelardo Morey, who at first mistook them for Indians. But Up de Graff shouted back, "We're Americans!” Don Juan ordered food to be brought. And they were able to look at themselves in a mirror, which was surprising. Two years without a haircut or shave, each haggard, barefoot, and shaggy, nothing good about that. (No wonder those other people avoided them for over three weeks!) They asked how long it'd take to get to Iquitos. The answer, five or six days paddling.

Fortunately, Don Juan treated them right, canned sausages, Edam cheese, crackers, sugar biscuits, beer, bread, etc. Plus fresh clothes! As they got back in the canoe, they shoved off for Iquitos with a contact there, a friend of Don Juan. "Go and see Dr. King." They arrived in six days.
Posted by dbkundalini at 6:00 AM