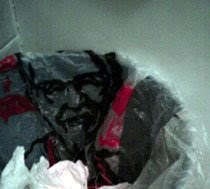 I honestly wasn't paying attention to what was right before me.

Like I was writing about yesterday, I was just letting my mind wander, and again I found myself seeing things in terrycloth towels. I saw a nude woman from the waist down close to one wrinkle. But just for a few seconds. I wasn't trying to focus but let her come into view as she chose and let her vanish as modesty dictated.

I really could find someone's daily fortune in the towels. I was thinking in terms of this, probably too analytically, as to what symbols I might see that would correspond to well known symbols, such as in the Tarot deck. It could lead to a whole new thing. Next time at the beach I might examine how towels are spread by people unconsciously. Because were I to know the predominant patterns of natural layouts, I would have the key to the spreads that would correspond most closely to what the psyche is most comfortable with.

OK, and this is funny, I want to comment on the picture. That's the garbage can in the bathroom. So I'm sitting there, not really paying any conscious attention to any of this, except the bottom half of the female figure in the one towel. She disappeared and I let her. I was just lazily looking around, not really focusing. For some reason I must have glanced down and I saw what looked like random black patterns on the sack in the garbage. And in a few seconds it suggested to me Colonel Sanders, which seemed strange; why would I be thinking of him? Then I focused in, and, amazingly, it was Colonel Sanders! It was a KFC bag and not a grocery sack like usual!

In a way, that sounds like a downer, because I really thought they were just random black lines. Then it turned out to be something very commercial and obvious. But the good part of it is that my consciousness made a good connection with what was actually represented even if I seemed to be straying in an unfocused, unconscious way. Which, if logic means anything, leads me to conclude that what I'm seeing in these towels actually is there! If I'm seeing what really is there on a bag -- without expecting it -- then it has to be true that I'm seeing what really is there in the terrycloth patterns. I need to find the other half of this girl!

I'm thinking this is a terrific breakthrough. It advances my journey by light years. I'm so far ahead at this point, I could lay down in the bushes and take a long nap and still beat the tortoise. I'm really going to go places with this. Every towel I see has a story to tell and I can get some kind of vibe going with it.

And to think ... none of this would've happened had I not been on hiatus. My time would've been occupied with all kinds of normal sorrow, depression, and frustration. But I took this break -- despite my many detractors -- and now I've had this breakthrough. It's stunning.
Posted by dbkundalini at 4:48 AM