Kick Yourself For Being A Chump 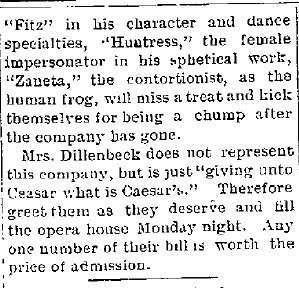 I've got a huge stack of newspapers setting here by my chair. I'm a bit backed up. I'm trying to catch up on my reading. Either that or I need to cancel my subscription. Some of the issues are getting fairly old and stale, but still, money's money. I've got them, I need to read them, even if it takes me forever!

Anyway, a copy of The Nashua Reporter, Nashua, Iowa, from Feb. 13, 1908, has worked itself to the top of the stack. Of course I'm thinking, 1908? I've got to read faster! But still when my eye caught an article on the vaudeville show coming up at Lampson's Opera House, I took my time and read it over carefully.

This is definitely a show I need to catch -- or, more accurately, a show I would've liked to have caught had I been born in time and it was happening when I had free time. It's a good thing it's not this week or next week because I'm really busy and might've had to miss it. The best thing I can say at this point is, It's been over with for over 100 years, so there's no reason worrying about it. Still ... I am sorry I missed it.

And I should be sorry, since, according to this little article, I missed a treat, and "those who fail to avail themselves of the opportunity to see and hear" this show will "kick themselves for being a chump after the company has gone." OK, the opportunity and the company is now entirely gone -- dead and gone -- leaving me to kick myself for being a chump. Except, obviously I didn't have the opportunity in the first place, so there was no way I could've availed myself of it. Still, a swift donkey kick backwards, hitting my tush, lets me know that not being born in time is no excuse.

The rest of the article (not pictured) tells us that Mrs. I. Delight Dillenbeck (seriously, that's the name given) was among the advance guard of road attractions, and she was the newspaper's authority in saying that Fitzgerald's fashionable Vaudeville Company "is the best, cleanest and most refined attraction of its kind before the public today."

Mr. and Mrs. Fitzgerald are in charge of the company, and they are artists, as is every member of the company. Then you can see from the excerpt that "Fitz" has some character and dance specialties: 1) "Huntress," the female impersonator in his spherical work; 2) "Zaneta," the contortionist; and, 3) The human frog. That's the way I read it. But it could be that "Fitz" does other characters and dance specialties, then there's other members of the company who are the Huntress, Zaneta, and human frog characters. And it's also possible that Zaneta the contortionist is also the human frog, whether being played by "Fitz" or another person.

Whatever way you want to sort that out, it sounds like a heck of a show, and -- swift kick, I'm such a chump -- I'm sorry I missed it. (If I see any other clues as to "Fitz" and the other performers' identities, I will post them.)

The last paragraph tells us that Mrs. Dillenbeck, while part of the advance guard of road attractions, doesn't actually represent the Fitzgerald team, so that's quite a testimony on her part, "Giving unto Caesar what is Caesar's."

So there it is, they were coming up at the opera house on Monday night -- the week of Feb. 17. And any one number of their bill being worth the entire price of admission, that means the human frog, just to name one item, would've been as good as free.

UPDATE: I've studied this issue now for a while and I believe I can conclusively say that "Fitz" was not Huntress the female impersonator. There's enough references to Huntress out there, not connected with the Fitzgerald name, that he was clearly a separate performer. I suppose I should've immediately known that because Fitz wouldn't likely also be the contortionist, etc. So it's "Fitz" in his characters and dances, then Huntress, then Zaneta, who would be the contortionist and the human frog.
Posted by dbkundalini at 4:40 PM

Thanks for posting this! I can tell you that Zaneta n fact was a different person, whose stage name was Charles D Zaneta, but his given name was Charles Robothem who lived n Dubuque, Iowa. He was a contortionist with Fitzgerald's Vaudeville company and I have heard my family refer to him as the human frog. So cool to find a write upon him, as I have been trying to find out more about him for the last few years! Thanks for posting :)

Thank you so much for posting this. Zaneta is an ancestor of mine who lived in Dubuque, Iowa, and his stage name was Charles D Zaneta, and given name was Charles Robothem. He was a contortionist and sometimes called the human frog, as I have seen a picture of him twisted up to look like a frog.:)