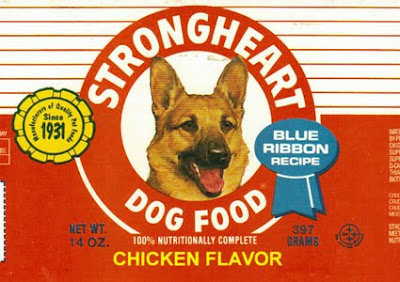 It's always fun to go through my collection of dog food labels like I've been doing this week, and it's a lot more fun when I'm able to share them with others who are interested. The week is going so quickly!

This week I'm just looking at five of them, four of my Strongheart labels, and then I'll cap off the series with a nice Husky (also a Strongheart brand).

Today I've got the Chicken flavor, like the others an early '90s label. I got this particular label at a farm supply store around 1991-1992. There was a short period back then that I was between dogs. Fritz had died and we were still auditioning a few collies. But still I wanted to work on some of the gaps in my collection, and the Strongheart Chicken flavor being a very common one, I picked it up. No big deal. But I remember it clearly because I didn't want the food in the can to go to waste. So I opened it right outside the store and scooped the food onto a McDonald's bag and sat it around the corner of the store. I figured a dog would happen along sooner or later who wouldn't mind a chicken dinner. It was win-win. He'd have his meal for that day and I'd have a quick label.

Like I said, this is a very common label. It's so common, of course, that when you look through the magazine ads you always see it as part of a starter collection mostly geared toward kids. Just as a come-on, they'll always have a rarer label prominently in front, but then, almost invariably, you'll see some bright orange peeking out toward the back. That would be our label!

Collecting dog food labels, like anything else, unfortunately has its snobby side. Because it's very easy to get jaded and a little too proud of the rarer gems, like a Ken-L-Ration Beef #1 or a '60s Lollipups box. I hate to see that because these people are forgetting that they started out fresh at one time too, they also once were newbies. And I'll bet they started off with the lowly Strongheart Chicken or got one very soon after! I'm sorry if that rubs anyone the wrong way, but no one likes a snob, that's just the way it is.

Maybe it doesn't have much value. OK, we get it. But if everyone threw them away, you know what would happen? They'd suddenly be rare and valuable! So there you go. Let's just be content with what we have, don't judge others, and realize that this label too is a good one. We'd all be missing something if we didn't have it.

Let's look at it. I don't know if the orange scanned all that well. But the featured color is pure orange. The basic design is well known. We've got the big eared dog in the middle, who in real life must've died ages ago but lives on in our (strong) hearts. The blue ribbon stands out starkly against the orange. We see the other elements. Checking the ingredients (not pictured), we're looking for Chicken ... and, yes, I do see it, second right after water ... "Chicken."

Not to put too fine a point on it, I hope, there's really nothing about this label to be ashamed of. If I didn't have a dozen of them already, I guarantee you I'd be looking for one. Again, let me just call everyone to be content, and realize that we all started at some point. Like I said above, I didn't rush out to get one of these, but then one day I was at the store and decided, "Why not? No one's looking. Just get it already." To me that's intelligent ... Live and let live.

Tomorrow: Something a little more exciting, the Strongheart Beef, Liver & Bacon flavor.
Posted by dbkundalini at 7:55 AM