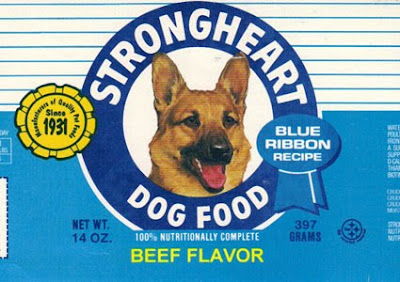 I've got a real treat for you -- for five days only, with one a day, some classic dog food labels.

Collecting dog food labels is admittedly a rare hobby. But if you know anyone who does it, they'll tell you it's actually quite rewarding. One, it preserves the history of the labeling of dog food. And two, it's economical. You can still get some real steals, even on eBay.

I wanted to bring out a few of my pieces here, a quick series of five labels only, both to display them and to say a little about each one, what makes it such a nice piece and so forth.

I've always thought the Strongheart labels were among the most beautiful, so this week I'm going to feature four different ones, the Beef flavor you see pictured, then four other varieties. The last in the series will be a beautiful Husky label, which, as you may recall, has a very bold red background and a Husky dog on it with a tongue redder than a strawberry! The Husky label, also being made by Strongheart, complements the others while providing variety.

Anyway, let's look at the Strongheart Beef label today. I've always considered Beef the basic flavor. Liver has its distinctives, and Beef, Liver & Bacon is a specialty flavor, but Beef is very basic. But being basic, Strongheart didn't give it a plain label. On the contrary, it's very nice, showing two things, how basic the flavor is and how valuable it is to Strongheart's lineup. We see the "Blue Ribbon Recipe" ribbon on each flavor. But the Beef is the one with the blue background, matching the ribbon perfectly. To me, that's the same as saying its place in the lineup is first, first among peers.

Of course we see the dog in the center that is part of the Strongheart logo, then that strong, rich blue background, the flavor announced in yellow capital letters, and the other elements necessary for labeling canned dog food. How do we know there's beef in the can? Because we can glance over at the list of ingredients and see it explicitly says "Beef by-products."

It's quite a nice piece!

Just a little collector's inside information. The UPC code number on this flavor was 77200 10106.

My grandparents fed Strongheart Beef to their dog, Cinders--"that mutt," as my grandfather would say. One of my most vivid childhood memories is the smell of that dog food--not a good or bad smell, but I sure do remember it. I used to bicker with my brother over who got to open the can using the nifty cabinet-mounted can opener. Then we'd squabble over who got to dish out the can of food to the grateful mutt. So there you have it. A story can hide behind a lowly dog food label!