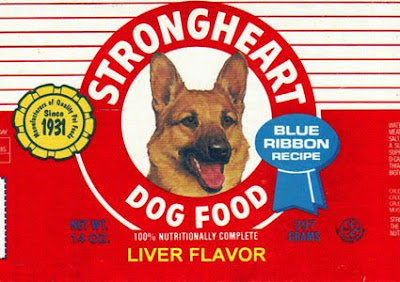 You must've seen this one coming today, after I mentioned it yesterday, saying the Liver flavor "has its distinctives." That was surely a gimme!

And of course you would've been right, since there it is, one of the boldest, most eye-catching labels I know of in the history of dog food marketing. It's the bright red that sets this one apart.

Liver is a meat that is known for its redness, like other red meat, but it's always a deeper, darker red. It has a very blood red look to it. Liver takes its name from the organ of the body which it is, the liver. I could look it up and find out for sure, but I think it is responsible for filtering bile out of your system, or filtering something, maybe blood. That would explain the blood red color. It'd be interesting to examine the liver of a new born calf, to see if they start out a different color, like white, then become red after working a while.

Well, be all that as it may, liver is edible. I can handle it in smaller portions. I love a few chicken livers, fried up, although the chicken producers have taken to selling chickens without the livers in recent years. But when it comes to cow liver, I'm not a big fan. One, it's way too much to have a piece of liver covering and hanging over the edges of your plate. And, two, in my opinion, the taste isn't good enough to be the centerpiece of a whole meal.

But that doesn't mean dogs wouldn't like it. And that's what we're here for. I don't collect dog food labels because I myself eat the stuff; I don't! So I need to keep my comments on the quality of the meat and the desirability of the meat to a minimum, and just comment on the label itself.

No collection is complete without one of these, the Strongheart Liver with the distinctive red presentation. That said, please don't be discouraged if you have a hard time finding one. They are rare and getting rarer all the time, because most people over the years simply threw them away. Plus, liver, being a meat that many of us don't like that much, there's a real bias against it -- we actually do make decisions about the dog food we buy based on what would appeal to us -- and so it generally sells less than, say, your Beef or Chicken flavors.

All that said, the collector knows that part of the value of an item is determined by its rarity, and so this is a label that we all seek even though we might not personally like a big sloppy plate of cow guts ourselves for a meal. Even with a side of steamed onions, which frankly isn't that much of an improvement.

OK, I'm looking at the label. And I like what I see. The Strongheart dog with the enormous ears in the middle. The blue ribbon standing out prominently against the red. The list of ingredients (not pictured), verifying that, yes indeed, this particular can of food does include "Liver."

This particular label is from the early '90s and is a very nice piece to have. My own copy has some frayed edges, since whoever bought it originally didn't take the time to get it off the can neatly. Still, the piece's rarity in the marketplace means this one retains its higher value in spite of this (very common) flaw.

Tomorrow: Strongheart Chicken flavor.
Posted by dbkundalini at 4:22 AM