In the industrial section of town, there are very many piles of metal, some of it twisted, some stacked neatly, and some falling over. 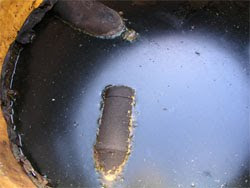 You could easily get hit walking out there. It looks like they make it as inhospitable as possible, just so you, the average citizen, will stay away. I was out there one day nosing around and took some pictures of a barrel that had oily water in it. I think it was water. I didn't touch it. It looked thicker than water. It gave off a pretty color. It looked possibly toxic.

Things fall over. All of us know that. If you have a bunch of boards leaning up against a door and someone opens the door from the inside, they'll fall over. Fair enough, we pick them up and put them in a better place. But not in the industrial section. There they simply let it go to pot. If the boards fall over some perturbed individual just kicks them out of the way. Next thing you know, the guy who mows (poorly already) won't mow next to them. And then weeds are growing all around them, big weeds. They're laying at every random angle. They're rotting away. Bugs and worms and snakes are now living under them. And there might be a rusty nail or a bunch of staples sticking straight up, making a hazardous situation.

Look at the barrel again. It illustrates the kind of haphazard standards out at the industrial section. "I'll toss my empty bottles in this barrel." The barrel gets more and more water in it, which mixes with the toxic stew of chemicals coating it, perhaps congealed in the bottom. There's a sizzling sound, a lot of foaming, and being neglected it builds on itself, bubbling, seething, until the bottles are floating in a thick metallic looking liquid, barely recognizable as to their brand, and certainly losing their value if you wanted to redeem them.

It's a no man's land out there. They also have lots of cracked cement, the roads going to pot.
Posted by dbkundalini at 7:47 AM