A Felled Limb In The Industrial Section 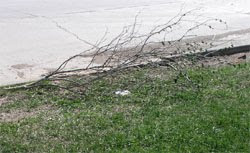 This was the first picture I took the other day when I was nosing around the industrial section of town. And in many ways it's the most haunting.

It really shows part of what we're up against when it comes to the Industrial Section vs The World. Though they obviously take a place in the world, they are at war with not only society but nature itself.

It's simple enough to see the environmental damage that goes on out there when you look at the grass, sucked down into the mud by the passing of many semi trucks, usually speeding. The city doesn't put sidewalks out there, for a variety of reasons, including one very important reason: We're not wanted out there. So instead of a nice trim walkway, with families strolling along with a helium balloon purchased from a friendly sidewalk vendor, there's all this depleted grass, muddy muck, and downed limbs.

Trees are expendable in the mindset of the typical industrial section mogul, which would probably go without saying. Because virtually everything and everyone is expendable to these bloated pigs feeding at the trough of fast money with their devil-may-care attitude. I'd love to take this felled limb into their office and throw it on the desk and ask what this is all about.

And that of course is just the tip of the iceberg, as the old saying goes. Look anywhere and you'll quickly see the place is as unsanitary as all get out.

I won't have time today to be gathering and examining evidence and lamenting it with a mind to do something about it. I have other duties in the more hospitable side of town.

But it's funny, I couldn't sleep early this morning, so I got up and turned my ear to that direction of town -- it's not that far away -- and I could hear the roar and hum as a constant background to the rest of the night. I could only shake my head and think, Still at it, huh? Then I waxed a little more philosophical and started thinking, As disgusting as it is at one level, if you listen more closely, it's the same OM that you hear everywhere.
Posted by dbkundalini at 7:19 AM