"Safety First" At The Industrial Section 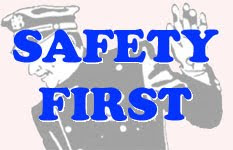 I've heard from a number of you who've read my Industrial Section posts, and the biggest theme that's coming out is your instructions to me to "Be safe!"

It's just like I used to hear the reporters say to the correspondents during the Iraq War, back when we used to keep track of it. They'd have an explosion in the background and the reporter would say, "Be safe!"

Well, first, I thank you for that, and, second, let me assure you that I'm being as safe as I can be. I know danger is my constant companion, there's no question about that. But that just goes with the territory when you're someone who feels rightly or wrongly that it's your calling to stick it to the powers that be, especially when they're thwarting the will of the people or enriching themselves at our expense, in particular if it involves environmental hazards, a public nuisance, or arrogant willfulness.

Unfortunately I think all these things are going on in the industrial section of my town and probably your town as well. These people are jaded by their work and have made themselves into little gods who can do no wrong, or certainly wouldn't admit any.

But I'm definitely thinking "Safety First," don't worry about that. My own safety and that of any willful moguls I might be taking into custody by the power of a citizen's arrest. If I can get close enough. Because they have several layers of goons between you and them. It's like trying to visit your doctor. You know the doctor's in there somewhere, maybe in the holy of holies, but you never see him show up, leave, go to the bathroom, or say boo in public. The waiting room door's always shut before they arrive, so maybe they come up from a floor elevator.

I think the best safety "tool" at my disposal is how fast I am on my feet. Not running fast, but thinking fast. I could come up with a million excuses for why I'm there, for one. And two, I can feign ignorance like no one else you know. Even now I'm practicing my blank stare. It's very empty looking.
Posted by dbkundalini at 5:19 PM