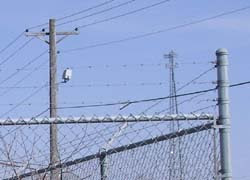 This is my world. I live in it. And I should not have to co-exist with this, a never ending tangle of fences, wires, towers, transmitters, and video cameras.

The picture doesn't exhaust the blight of the industrial section of town, of course, but it does illustrate nicely the concentration of ugly elements that you see there.

This wire connects to that one, and they all stretch a hundred different directions, coagulating in a massive tangle at boxes attached to the sides of buildings, disappearing within to make a fire hazard. This fence adjoins that fence. They're hooked at the seams, and some of the fences aren't even made by the same company, so the seams aren't even truly compatible. They're not meant to mesh. The poles, the posts, the utilities, all constitute the most confused mess I've ever seen, and I wouldn't doubt it that they're overloaded at times because of the great consumption out there.

It's a blight on our town, and more than that, the world. Especially when you multiply all the other industrial sections of other towns. If you brought it all together, you'd have the ugliest state in the country. It'd be concrete, trucks, piles of stuff, rubble, fences, wires, posts, towers, transmitters, weeds sucked down into the mud, stacks of boards that have fallen over, and rusty nails. The rust out there ... frankly, it's out of this world. Talk about hazardous!

And there doesn't seem to be any way to control it. It's not just a blight, it's a sprawling blight. I don't know how to put it in simpler terms than that. It's an urban blight, a hazard in physical and even mental ways, as we see it, the sprawling industrial section, and it assaults all the senses. The sense of sight, that's clear. The sense of smell, the occasional unpleasant odors that you notice. The sense of touch, if you pricked your finger on a rusty fence, or got hurt in some other way. The sense of hearing, you can hear it groaning away. And the sense of taste, none of it would taste good.

It's a sprawling blight on our world. That is to say it is a blightful sprawl, no question about it.

There may be no way to get rid of it entirely. I will grudgingly admit that some of it is possibly necessary for society. We do need some industry, like the Hefty company to make trash bags. And the truck companies to make trucks to come get them. But beyond that, and maybe a few other companies, like a place for the farmers to wash their crops and put them in cans, then to have a few trucks of their own to take them to market, I think we could severely limit it.
Posted by dbkundalini at 7:43 AM