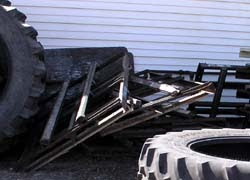 This is the last photo I took in the industrial section of town the other day when I was out there nosing around. You can probably see that it clearly represents some big monster truck tires being tested in their ability to crush things, in this case some misfortunate wooden pallets.

I'm trying not to say too much about the specific location of this industrial section, to preserve my ability to nose around out there with less suspicion. But I will drop a major clue as to where it is. My town is known as the Monster Truck Tire capital of the world. They make them right here.

That makes for a lot of pollution, of course, because rubber is a hard commodity to come by. They get it by recycling smaller tires, grinding many for the raw materials and burning others for the intense heat required to bring the elements back together. We regularly have rubber drives. And the prophylactic machines at the gas station are routinely broken into.

So all this rubber is fed into the system, then it comes out as tires ... and smoke. There's a smokestack out there big enough that they could fit a football stadium on top. The fires are burning and the black smoke spews forth until the foreman hits the switch at the end of the workday. That's when we breathe. 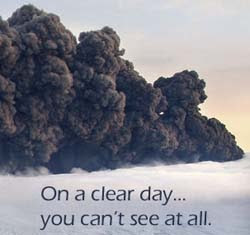 To get a picture of it is hard to do, because when it's in operation no light can enter or escape. And at night they retract it far down into its ground chambers to muck it out and get it ready for the next day. Plus, it's said that they enforce a strict "No Cameras" policy, trying to avoid governmental intervention. Even the local camera store is in cahoots with them and the manager says he would refuse to develop the film if there was anyone foolish enough to take its picture.

I, on the other hand, am not in cahoots with them. I fiercely oppose the industrial section and everything about it. I simply don't care that half the population depends on the place for their livelihood. One, I've been to other towns and I know this isn't normal. Two, everyone gets an ugly looking Fred Flintstone beard from all the smoke. If that makes me "a bad guy," then so be it!

Still, it's hard not to feel a tingle of pride working its way up my spine every year during Monster Truck Tire Days, when the whole town comes together in the park. The foreman has flipped the switch and turned the thing off. We're able to see each other and get reacquainted. The Lion's Club fires up the grills, super hot, fueled with charcoal and tire rubber, and burns everyone a few hamburgers.

For those days it almost seems worth it.
Posted by dbkundalini at 7:45 AM