Did The Major Industrialists Hide The Flight Plan? 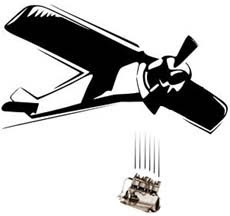 Today's post centers on certain issues from my past that perhaps could just as well be left buried. But since I've personally exhumed them many times over the years, and recently, and performed repeated autopsies on them as well, I may as well put it out there.

Admittedly, if anything, this is a subject that probably belongs to the "Cold Case" file. Because the major industrialists, in collusion with the airport, and with payoffs to the FAA and their subsidiary agencies, have thus far successfully kept the details strictly in the deep freeze.

The issue, as far as I can remember it, centers on a particular plane ride I took as a kid. The date was sometime, estimating here, between 1960 and 1966. I remember certain of the details distinctly. One, it was indeed a plane ride; that much I remember with clarity. The plane had two steering wheels. We went generally in a northeastern direction, although it was a circular flight, in that we took off and landed at the same airport. The pilot was a man. He allowed me to steer the plane for a while. And I remember looking out the window. Other than that, as to the make of the plane, the identity of the pilot, etc., I have very few memories.

It's been bothering me for several good reasons. One big reason is: I don't know how safe the plane was. Along with that, I don't know how thoroughly it was checked out or whether the pilot was a certified pilot. You can see the questions start multiplying as soon as you start asking them, and the whole subject is one enormous can of worms. Who exactly was behind this flight? What did they want with me? I was just a kid, somewhere between eight to 10 years old. An innocent. When he asked me to take the wheel, was he sleeping off a bender from the night before? Or was it meant to look like suicide?

The questions are simple enough, and there's no reason they couldn't be answered, even at this remove, assuming the principals were still alive and the records well kept. If the various participants in this little drama are deceased, still the records should be handy and available. But this is where it gets strange. There doesn't seem to be any records, and everyone is very close-lipped as to who the pilot was or any of the other operatives. They all seem to have vanished, or, even more mysteriously, to have gone underground. But who's hiding them? And what is it they've got to hide?

I called the airport and asked them about it! The airport, for those who don't know the lay of the land, my half acre and the town, is off to the southeast. Every night for the past 50+ years, however long I've been at Grandma's, I have seen the swirling airport light above the horizon. It lights the sky in its repetitive sweeping motion. It's a little dimmer now that I have a tire factory/warehouse between my window and the sky, but I see it all the same. So I have what you might call an intimate relationship with that particular airport. If anyone ought to be able to call and ask them questions, it would be me.

Anyway, I called, expecting them to go to the file and read off the information. No harm, no foul. In addition, if the pilot happened to be there, I was hoping to quiz him personally as to what he remembered. And if anyone else on the staff was out there, I figured they could either corroborate or contradict his version of the facts. So it was a real stunner to have the guy on the phone playing dumb, claiming not to know "the slightest thing" about the flight, the plane, the pilot, the file, or any other relevant details. After a few minutes of browbeating him, something went wrong with the connection, because suddenly we were cut off.

What I'm thinking, and forgive me for stating the obvious, is that there was very likely something wrong with the plane. And going along with that, it's likely that the manufacturers and the airport and the pilot knew about it all the time! I can only come to one conclusion, that the plane was manufactured by a plane manufacturer from the major industrial powers, who even then were using shoddy workmanship, then covering their tracks with payoffs to the very people who risked my life that day. It's all very cozy, I'm sure, all the snakes curled up in the nest together!

But how can I know? I want to know. But I don't see the pilot stepping forward to disavow the facts. I don't see the records in a sheaf or folder. What happened to them? Does it sound reasonable that all the other records from that time period would be present and orderly at the airport, yet that particular file would be missing? That's the conclusion I'm drawing from the guy saying on the phone that he didn't know "the slightest thing" about "the file you're talking about." Notice his use of the singular. He didn't say a word about the many other files, leading me to believe they're still present and orderly. But someone, with some ulterior motive, has lifted out that one file, and, who knows, it's might be destroyed by now.

I'm just thinking of my safety that day. If I can get some word from the pilot -- an admission of guilt -- I would likely be very forgiving. After all, I did survive, in spite of the worst they could throw at me. I just want to know. Is that so much? In addition, I'd love to hold the perpetrators legally responsible, to have them locked up, for society's protection and mine.

There's another aspect of this whole thing I should mention. They were risking my life that day with '60s technology, perhaps even technology from the '50s. That doesn't sound very responsible, convicting them of irresponsibility if nothing else. But I believe there had to be more to it than that. I think the major industrial powers, for whom I've been a burr under the saddle for the better part of six months, might've already been out to get me, because there's no limits to how much they hate me. With no limits, we can't exclude any possibility.

So all these nagging questions remain: Does the flight plan from that day still exist? Did they hide it, and where? Precisely how safe was I? Should I let it go? I'm sorry, but I can't. There's people from 50 years from now who may be on their hit list today. The airport needs to keep much better records -- maybe in triplicate -- so their questions also can be answered in the future, assuming they survive this airport's mysterious plane rides today.
Posted by dbkundalini at 4:34 AM