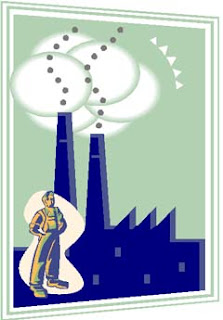 The average industrialist is a man in appearance like other men. He's completely ordinary in that respect. He looks the same as they, with nothing to distinguish him. You've seen one, you've seen them all.

And yet, of course, there is something that distinguishes the industrial man from other men. He just so happens to dream big, then act on his dreams. He sees an opportunity and takes it. He sees an empty lot, a yard, a piece of property, perhaps a park, and he instantly envisions what it could be, a place for a factory, a place for manufacturing. And that's special!

But for all intents and purposes, again, in appearance, as to his form, he's just a man. If you stripped him down and put him next to other men, you'd see the exact same features. If a thousand men including our industrialist were stripped down, and a computer were to compile data by a highly technical process like tomography or digital imaging, you'd see data on a thousand ordinary men. The information that resulted, no matter how you massaged it, would not show much, if anything, to set the industrial man apart. He's just a man... 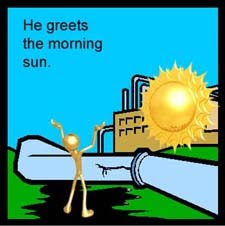 Just a man. But, O, what a man! This is the man who gets up in the morning and arrives at his own factory. He's there bright and early, checking the lines, the parts, and maybe he even jiggles the door to make sure it's been locked all night. In exactly an hour, employees will be showing up, ready to punch in. At that hour, this man will be The Boss, in charge of all those lives, and ultimately responsible for whether their children eat. He's not just a man. Far from it!

And yet the facts are indisputable. He is ordinary, nothing special. He stands exactly 6 foot tall, perhaps, or maybe 5 foot 2. He's any height, any weight, any color, any body type. All these facts are incidental to him and every other man.

It could be he has bad breath, like any man. It could be he has flabby skin, dandruff, liver spots, ear wax buildup, wrinkles, jock itch, or shoes that pinch his feet. He grimaces like any man as he loosens his shoes in his office, thankful for a single moment of sweet relief. There's nothing special about him ... in those things.

He may be nothing special, in certain things. But he is special ... where it counts, in what his life amounts to, in what his life is. By the time the whistle blows, the employees will be faithfully at their tasks. From the boiler room to the lookout man in the towers, the employees will depend on this nothing special industrialist for their marching orders. He will personally oversee the production of that company's products, with the same story being repeated by other singular industrialists throughout the land. From disposable diapers to vats to wheels for hospital beds to paper plates, or even tires, this nothing special man will supply the world! 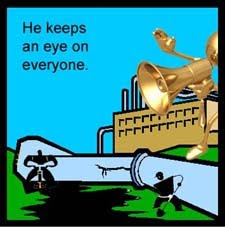 But, as is universally true in the life of man, he will have physical needs through the course of the day. We mentioned the pinched feet. But maybe he'll get tired, like any man. Certainly he'll need a lunch break, like any man, for his sustenance. And then there are all the bathroom breaks all of us take everyday. With the others, he'll take his place in the line, five men in, five men out. With military precision, five will answer nature's call, then exit so another five can take their place. As he stands there taking his allotted 30 seconds, he's just one in five, then one in 10, then one in 15, and so on. Just one man among many, one man and nothing more.

On a personal note, as an industrialist myself, making tires, I see myself in the mirror everyday. I'm like every man. I realize no one could really tell there's anything special about me just by looking. It's been my thought for some time that perhaps I should do something to change that. Like maybe wear clothing made of thicker, more lustrous fabrics. Or a science fiction, space movie collar with big points. Maybe a ray gun in a holster. A bigger car, a newer house, new shingles on my old house. Anything to make me stand out for what I really am, an ordinary industrialist who is in all actuality very very special.
Posted by dbkundalini at 4:34 AM