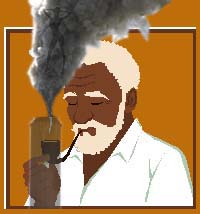 We want to pay tribute today to a well-wizened industrialist, one of the true elders of the Residential Industrial Movement (RIM). He's been with us since the very beginning, April or May of this year, going well on six months. But he'd rather we didn't use his actual name -- he doesn't want marriage proposals -- so we'll just call him Ernie.

We're calling him well-wizened because, frankly, that's what he is, yet he's seen it all and is still standing. He's been through a lot of tough times and weather in all his years. From the howling snows of the winter to the blazing hot days of summer. For sure, the years of age have taken over Ernie's face, even though he still insists he's only 39! And of course we believe him...

Be that as it may, Ernie has actually seen more than his share of years, one after the other adding up to quite a few. And in this six months, with his standing as one of the RIM's elder statesmen, he's seen not just the ravages of time but many tough challenges. One, getting a factory up and running is a tough business -- he doesn't want us to say which company is his, again, marriage proposals. But nothing's been easy. He worries a lot about us younger folks, hoping we'll be able to stand up boldly to the Major Industrial Powers (MIP), which so far we have.

Ernie has all the lines of age and the wisdom, and that's a very cool thing to have. He's not like "all those young idiots," as he puts it, who turn from the serious things of work, aren't frugal, and are out "tomcattin' around and gettin' their lives tangled up with girls." But he doesn't always speak his mind. Usually he just stands by in mute silence, knowing it wouldn't do any good anyway. They've got seed to scatter. So he watches all these "fool" young men ride by in the girls' convertibles, eventually being taken to the cleaners.

When I think of Ernie, I have respect for his experience. As stated, he's been with us from the very beginning -- since May, I think it was -- and that's the kind of experience that doesn't come easily. An old-timer like him fascinates me -- remember I have a 104-year-old grandmother -- also well-wizened by the ravages of time and not looking to remarry.

It's easy for me to imagine things about Ernie, since he is such a private man. Such as, I imagine him at home looking within himself, being alone with his thoughts. And I can picture him like an old prophet, up on the highest hill, pulling his mantle up over the lower half of his face, his eyes squinting as the smokestacks blow. In those moments he sees it all, what the ravages of time and three failed marriages have brought. It's a very inscrutable image, an old man who sees it all, and wishes he'd done certain things differently. Milk is fine, but you don't need to buy the whole cow...

In my imagination, Ernie thinks back to the days when people told folk tales by heart, sang songs from their memory, and had good times hanging out on the porch or at the general store. I can picture Ernie as a young man at the general store, playing checkers on top of a pickle barrel, and meeting the first girl -- dammit -- who turned his eye. Nothing they did back then was rushed. They'd sit and look at the potbellied stove like it was a TV. No one was thinking about divorce and losing everything.

Bringing it back to reality, the realm of established facts, I know Ernie opposes the MIP, including even the old-timers from his own generation who are MIP industrialists. Because he knows they're exploitative, selfish, and out only for themselves, not their neighbors. He hates they way they cut corners, have little respect for markets, and for the shabby quality of their inferior goods. They're old but somehow not wise, carrying on with their affairs and quickie Vegas marriages.

Ernie may not be well respected or well known on the world stage. But that's society's problem. The fact is, in the RIM he is a hero. And he's my hero, proving that lonely bachelorhood is the best path, even if it took him several cracks to finally get it right.
Posted by dbkundalini at 4:34 AM